We have a number of SuperMicro RAID 10 boxes with redundant PSU, the same model and spec and use the same rackmount APC UPS. One has suddenly taken to rebooting if there is a minor brown-out.

Windows logs only point to 'unexpected' - as in loss of power. This has happened before and replacing the UPS has always fixed it. So we swapped out the 4 year old UPS for a new one. As the server was booting the UPS decided to self-test, and the server rebooted again!

We couldn't fault the unit we took out, so unless two PSU's are playing up at the same time I can't think of anything else that could cause it. Swapping out the standard UPS for an online one would almost certainly cure it, but if something is failing...

I assume there is a controller for the PSU's? Something has become more sensitive to the milliseconds it takes to switch in the last couple of months.

With downtime being a major factor replacing the UPS again with an online one (like the APC SRT range) would cure the current problem - but is this a symptom that could develop into another serious issue? 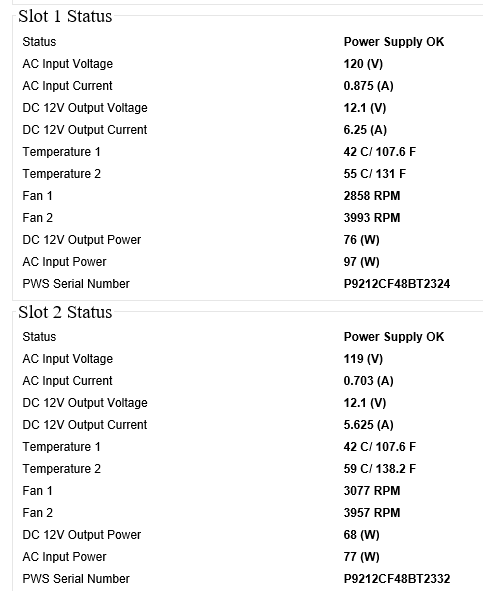 edit: You are having one of three problems which you cant verify without more logging of the length of outage that the system is losing power on. You did mention seeing transient losses on the UPS You need to correlate those with the logs from the Supermicro. If you dont want to use the UPS logs, you can instead attach one cord to the wall, but the UPS log will provide much better detail on the state.

All of these would trigger the Bios event log to record a power loss event. (1) The actual problem outage is longer, (2)The UPS is not providing the power needed during the transient(regulation issue), or (3)there is a problem with the PSU's or the PDU in the system not maintaining Power Good(PG) state to the motherboard.

Supermicro chassis draw different amounts of power depending on how many psu are operating. A dual psu system is drawing 50% load from each psu when the ups goes low, the lagging supply attempts to go 100% and accelerates the ups draw-down.

You shouldn't have both supplies in the SAME ups, and you should be looking at your ups load via management.

YOU SHOULD also be aware that the ups loads will double on the non-browning ups. My guess is the UPS is not sized properly to the peak load expected. That is affecting the systems and the UPS.

The information from the management GUI on the UPS contains graphs about power quality as well as battery status and load information. This will tell you if you're brownouts are happening at particular times and let you maybe track down the reason why you're having them in the first place.

The supplies do appear to be operating correctly when the power is good. Unknown as yet is what happens when the issue happens. The removable internal PSU's only put out +12 volts and PowerGood(+5). Internal to the system is a Power distribution Unit (PDU) unit that has the cords onto the motherboard and splits the +12v into all of the other voltages that the motherboard needs. When the UPS has the transient, for whatever reason the power to the Supermicro is falling outside the ATX spec(below) and the system is shutting down. That is at 95% of rated values.

It is possible for that PDU to be bad, but the only way to test it is by swapping the supplies from a system not seeing the problem. Swapping the PDU is a real chore.

Not the answer you're looking for? Browse other questions tagged power-supply-unit or ask your own question.

5
Plug single PSU into two different power sources
2
What are the essential considerations for setting up systems in a location with unreliable power?
2
Two servers, two PSU's, Two UPS
4
Does the additional load on UPS in case of grid failure amount to 100%?
2
Sun X4100 power supply failure LED on, but PSU working
6
Double UPS on high load during power down
4
HP ProCurve 5412zl warm-boots on power failure while attached to UPS
1
Special PSU for file server; procuring alternatives. t-win PSM-SRA10E-Z-R (ROHS)
2
Safely conduct tests that require unplugging server
0
Does it make sense to connect a redundant power supply to a C14 splitter?