Does a distributed filesystem have to consist of multiple filesystems located on different computers?

Does an NFS filesystem consist of only one filesystem? (See the diagram below)

If yes, is an NFS filesystem a distributed filesystem? 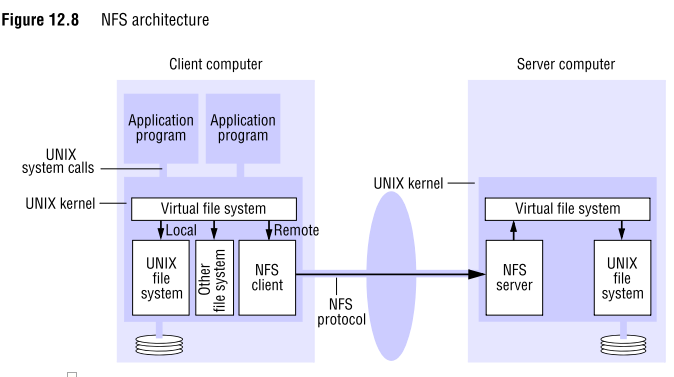 NFS is a Network Attached Storage, where a file system exposed to multiple client. Though the under laying filesystem is possible to be distributed over multiple nodes, for example when a cephfs is exported via NFS, with NFS v2, v3 and v4.0 the clients are accessing the data through a single NFS node. Thus exporting large distributed filesystems with NFS was not effective.

With NFSv4.1/pNFS data on nfs server can be distributed over multiple so-called data servers. pNFS has a concept of metadata server, or MDS and data server - DS. A client talks to MDS for namespace operations and to data servers for actual IO. The bandwidth and storage space grows with number of data servers.

There are several solutions that provide NFSv4.1/pNFS. For example, dCache (I am one the the developers), which exposes hundreds of Petabytes distributed on a dozens of data servers, or Hammerspace, which allows to aggregate existing nfsv3 servers into a single distributed storage.

The pNFS support is built into Linux kernel 3.9.

Not the answer you're looking for? Browse other questions tagged nfs distributed-filesystems or ask your own question.

1
Do distributed file systems partition a file across nodes?

3
Can I get a clear summary of the new features of pNFS?
0
NFS export of other mounts in the tree
11
Geographically distributed file system with preferred locality
2
Getting at fsid under Linux? Or an alternate way of identifying filesystems?
0
Multiple /dev/root in /proc/mounts output
1
NFS4: rpc.idmapd or nfs.idmap upcall?
5
What differences are between a NAS, a shared disk file system on a SAN, and a distributed filesystem?