How can I monitor CPU usage and processes on Windows Server 2012 as a service over a 24 hour period?

We have a long running performant operation that runs for 6 hours. When it was last ran, something happened for 5 minutes where its performance dropped dramatically and caused a few timeouts, in the middle of the night. I suspect some other process kicked in and hammered the CPU or similar.

The suggestion on this site from searching around is to use ProcessMonitor to monitor CPU. However, it only seems to capture traffic while it's running, and it is a desktop app. My windows server instance kicks you off after being idle for 10 minutes, controlled by group policy and I can't change it, so I can't use desktop apps for monitoring.

I need to monitor CPU usage over a 24 hour period. I am only interested in, process name, and cpu usage (%) so I can find out what, if anything, is kicking in and ruining things.

Because you get kicked off I really need something that can run as a windows service.

Is there any way to do this (using ProcessMonitor or similar tool - surely windows server has something built in?) as a service so I don't need to be logged into remote desktop, or am I going to have to find some kind of mouse moving script and leave my computer on all night?

Performance Monitor looks promising. It is hard to find out how to configure it to give me what I want.

I made a custom data collector cpu and process ID: 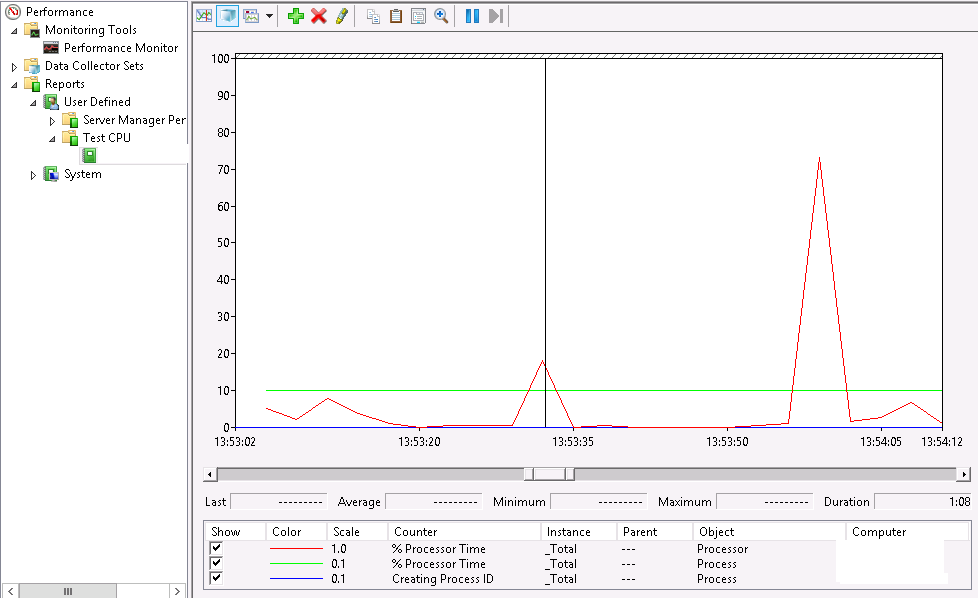 What I want to do is able to see the CPU usage of each process at a particular time, like you can do in Task Manager except with a graph and ability to view a snapshot at any point during the monitoring period.

So I can see a graph of 24 hours, see the point where there's a spike, click it, and see which process is causing it.

I am not even convinced that my above configuration if I get it working will tell me the process name either, it says process ID, if that turns out to be a guid or similar that's likely no help either, especially if the process starts and stops and isn't still running when I go to investigate.

Windows Server has a built-in tool to show performance data in real time or to collect data in logs for later review. I think that this will do exactly what you are looking for. 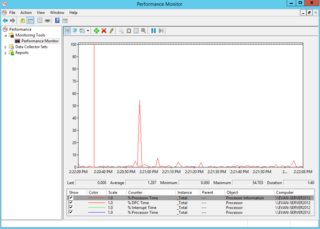 See this article for a basic tutorial on using Performance Monitor for logging on Windows Server 2012 R2.

See this excellent article on all the tools available to you for examining performance on Windows (mostly interactive tools).

Using Daniel K's suggestion of performance monitor, I found out how to do this.

If Windows performance counters do not work for you (indeed, they have some annoying limitations), you could use a dedicated metrics collection and visualization solution. This might be a bit overkill, though perhaps nevertheless a valuable addition to your toolkit.

I can recommend Prometheus as the metrics solution to use in such a case.

Next comes the hard part. Prometheus is a database - you can use the web GUI to query for raw data but the GUI is not very user-friendly and the PromQL query language can be unintuitive if you are not used to working with time-series data. I recommend the query irate(wmi_process_cpu_time_total[5m]) to start with. This will give you a graph of CPU usage in seconds of CPU time per second of real time, per process.

irate will give you the data from between the last two data points. If you want smoothed averages use rate which will use the 5m as the averaging period (irate will just use it as max limit).

Prometheus is a powerful metrics system that takes some doing to understand. However, it can serve you well over the long run in making automated systems observable.

PS. Prometheus is typically deployed with Grafana as the visualization GUI (replacing the barebones Prometheus built-in GUI). However, for just some quick troubleshooting you will not need this.

PPS. process-exporter and node_exporter are the Linux equivalent to WMI exporter.

Not the answer you're looking for? Browse other questions tagged windows-server-2008-r2 cpu-usage or ask your own question.

15
How to monitor CPU usage and performance on a Hyper-V server with several VM's
0
How to monitor process hogging CPU on a remote server
5
Monitor and graph CPU usage per process and per thread
45
Linux CPU usage and Process Execution History
1
How can I log the most CPU-Intensive processes in regular intervals?
2
10 min. bursts of CPU usage: how can I find out which processes are the cause?
0
Does it make sense to monitor free memory and CPU usage on servers?
0
Hyper-v VM high CPU usage in Windows Server by task manager?