I recently purchased a Dell R730xd that came with an H730 RAID card. I would like to bring an existing 6 disk ZFS pool to this server as well as create an additional 6 disk hardware RAID.

Is it possible to configure an H730 RAID card to operate in both HBA and RAID mode simultaneously? And then only manage 6 of the disks in a hardware RAID and allow the OS to manage the remaining 6 disks in a software RAID?

If not, can a Dell R730xd use both an H730 RAID card and an LSI 9207-8i HBA card simultaneously? Would you simply plug one SAS cable from each card into each part of the Backplane? Will I need to purchase any new cables to connect the LSI 9207-8i to the backplane in my R730xd?

Regarding your question about splitting the backplane across controllers, yes, it's possible. I've done this with 8-bay enclosures where two 4-lane SAS SFF-8087 connectors were present. 4 disks to one controller, 4 disks to the other. I don't know the composition or expander situation on the Dell server you're describing, though.

The only controllers that would allow this are those that have Mixed/Hybrid mode ports. HPE Smart Array controllers on Gen10 systems are a good example. They allow hardware RAID or HBA mode on a per-port/per drive basis.

I also have this running on an Avago MR9363-4i. /dev/sdy at the bottom is a RAID1 Hardware RAID1 for the OS. The remaining disks are split across two normal ZFS pools. 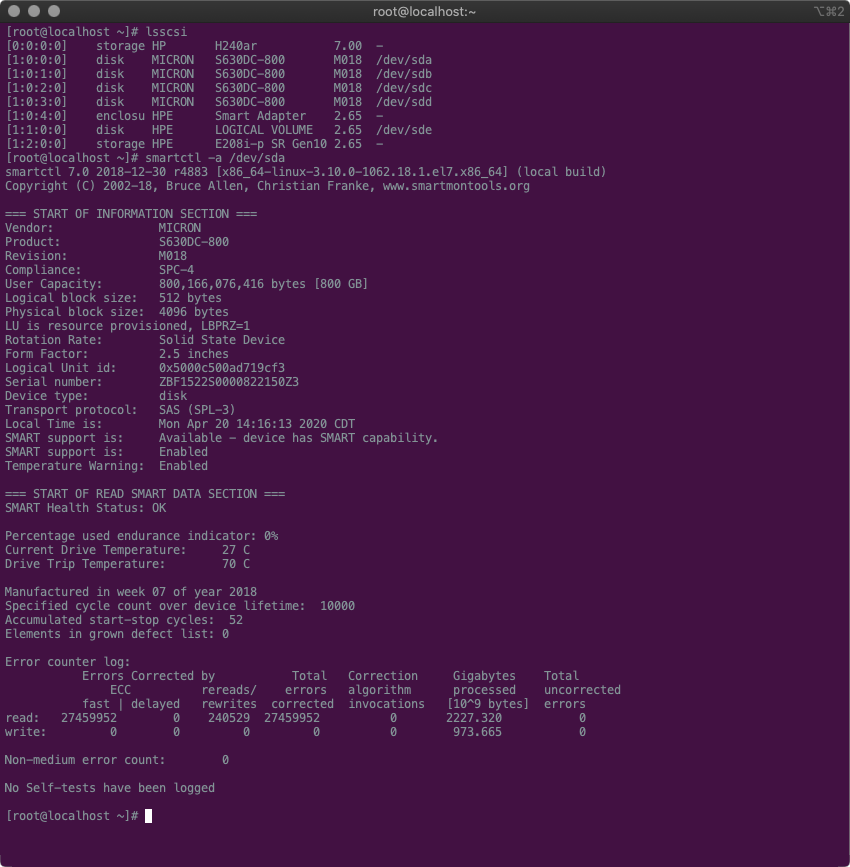 Replying to each questions:

In the end, as PERC 9/10 series cards are quite flexible you have no reason to use an additional RAID card.

Note #1, from the card manual:

I got same thoughs about mixing Perc hardware RAID and ZFS, I was thinking about splitting backplane or doing other nasty procedures. From one side I needed hardware raid volumes, from other side I needed to import existing ZFS pool.

I have readed that H730 can be set up for either HBA or RAID mode. However that's not true, at least for latest firmware. I have tested on R730, H730p mini mono and ESXI 7- everything works perfect. No need to create virtual disk. Passthrough works pretty cool!

Step 4. Im not sure if You can disable write cache for Non-Raid disks via BIOS, but I have suceeed disabling non-raid cache through OpenManage (of course cache still enabled for HW RAID):

Step 5. Non-raid disks and RAID disks will be normally visible on ESXi. Of course no problems with hotplugging.

Step 8. Use shell and test smartctl:

You can also hotplug any other disk, set it to nonraid via iDrac and then just on-live Edit VM options and add new RAW device, it will be detected and attached to FreeNAS immediatly without rebooting of course.

I have readed too much on forums that's not possible... not sure if new firmware added such capability, but actually I am more than happy. System is very flexible that way.

From one side iDrac is fully helath-monitoring created RAID Virtual disk (incl. patrol read and all), and from other side non-perc RAID disks are monitored via FreeNAS. Also, because thats 1:1 passthrough, of course disks temperatures are monitored too.

However, remember that Write Cache can't be disabled for Non-Raid disks via iDrac, there is no such setting in controller settings. So OpenManage (confirmed), or bios maybe.

Not the answer you're looking for? Browse other questions tagged raid zfs dell-poweredge dell dell-perc or ask your own question.

0
Dell H730 in HBA mode - Why are there issues with performance and SMART data?
6
ZFS on enterprise RAID pass-through, and ZFS on FreeBSD root