Should i select and use another partition or Extend root ? (CentOS)

I want to switch my current working partition to an existent one on the disk under CentOS. How to achieve this ?

PS : i want to switch to the larger partition (/dev/sdc or /dev/sdb/cl-home) (currently i am using KVM and others on /dev/sdb3/cl-root) so that i can install KVM and many VMs, is it possible ? Btw parted says /dev/sda is selected while i'm on /dev/sdb/cl-root

Or maybe to achieve that, should i mount the /dev/sdb3/cl-home at the "/" mountpoint ? EDIT : should i try to create a partition after selecting /dev/sdc (or /dev/sdb/sdb3/cl-home) disk with gparted like so : 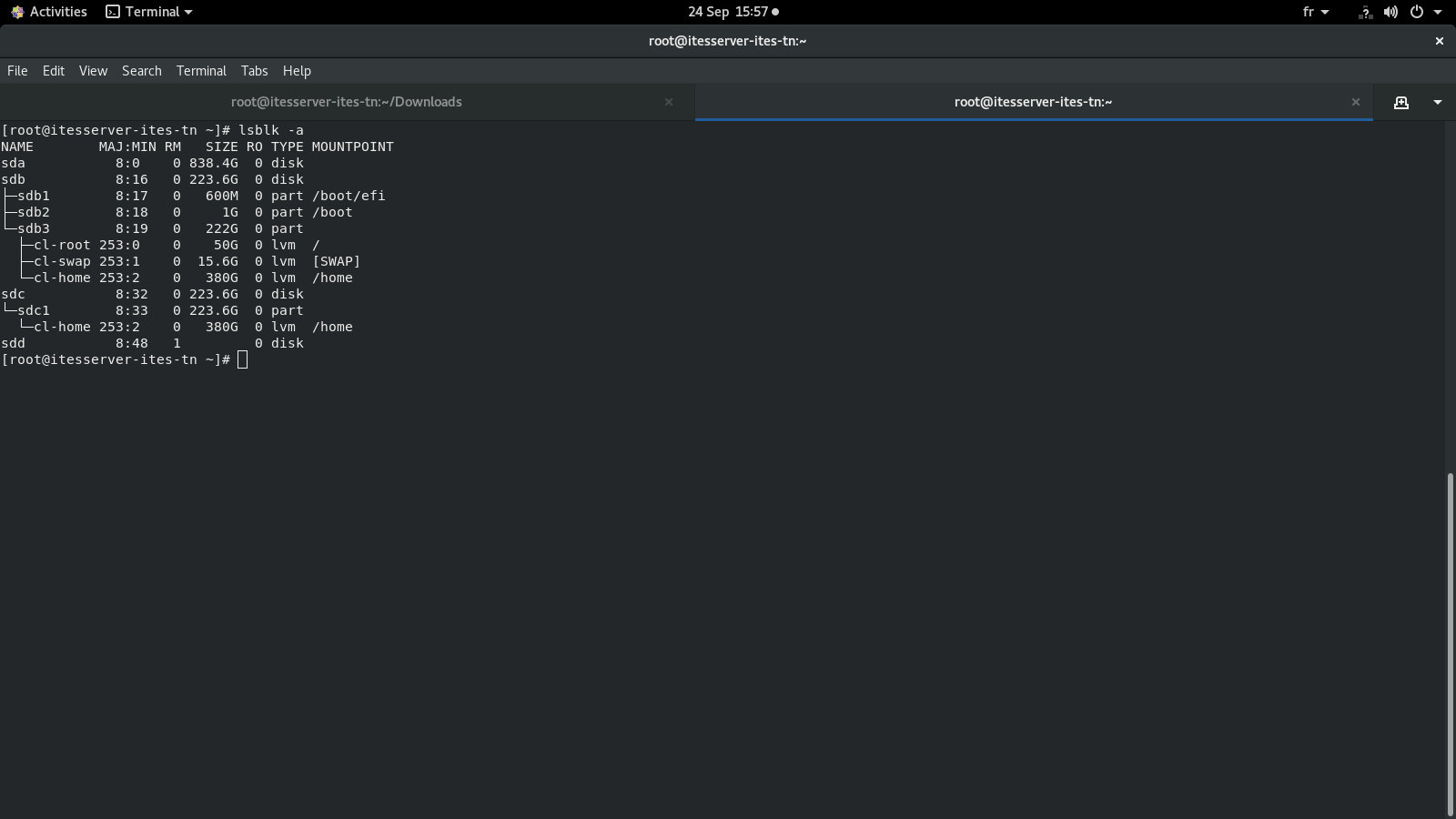 Or maybe to achieve that, should i mount the /dev/sdb3/cl-home at the "/" mountpoint ?

No, that will make the system unusable. OS and mount points are installed at / ("rootfs"). Just because the system has certain volumes allocated doesn't mean you have to use them, as sysadmin you can rearrange storage.

You already have Linux LVM, which has useful features. Use logical volumes, not partitions.

From the lsblk output we can infer that VG cl spans sdb3 and sdc1. Not ideal: requires both disks to be online for the VG to function, and performance will be uneven across the PVs as one also stores /.

Check how much space /home is actually using with df -h /home. It might be much less than its 380G size, given the installer's habit of giving the remainder to /home.

First of all, make a backup and test restoring it.

Regarding storing your VM guest data, create new LVs on new VGs. This separates the data from the OS install, allowing the disks to be moved independently.

Optionally, determine how you might safely remove /dev/sdc1 from cl. Some file systems cannot be reduced, this may require a backup, reduce the LV, and restore. And finally, pvmove and vgreduce.

Not the answer you're looking for? Browse other questions tagged centos centos7 partition or ask your own question.

3
Properly copy partition data to another disk?
1
Cloning a linux system from sdx to cciss
3
Quantifying the effects of partition mis-alignment
4
Preseeding Ubuntu partman recipe using LVM and RAID
1
Windows 2003 Server R2 system partition full - move and/or expand
2
copy LVM partition to new disk
2
How can i split a partition on Ubuntu?
0
Extending an existing LVM partition with fdisk
0
How to extend disk space in the current partition (with cmdlets)