Which actions are retained on SecRuleUpdateActionById changes from the original rule?

So, SecruleUpdateActionById requires relisting action flags. At least that's my reading of "actions that can appear only once are overwritten". Which is fairly obvious for most of them, but less so for ctl: or specialty parameters.

I'm currently building this editor GUI, and so I'm wondering which flags from the original SecRule are worth repeating in a SecRuleUpdate. 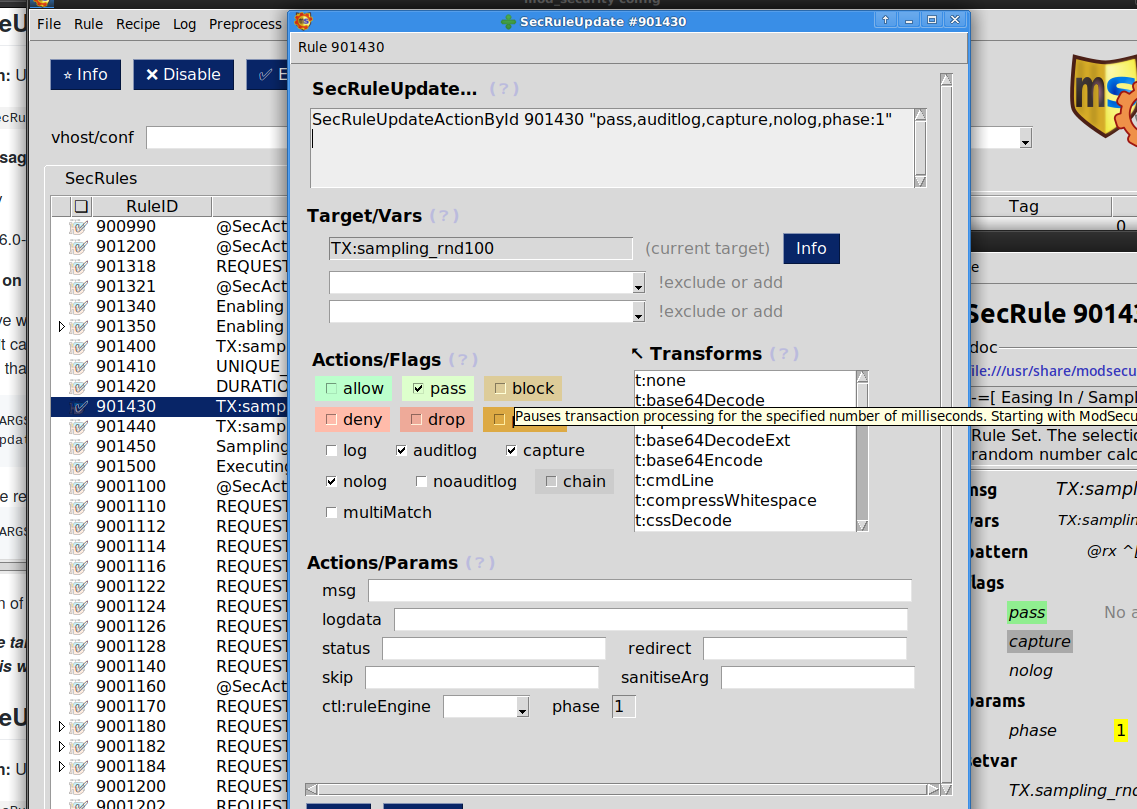 Other than "can appear only once" the manual gives relatively few hints on flag types. The "Action Group" for instance (Meta-data, Non-/disruptive, Flow, Data) doesn't fully convey which options are repeat/list parameters. So for now I just classify all possible actions like this:

So logdata is really just a variant of the msg option. But I'm not sure if it can't appear multiple times (and hence would require omitting from the SecRuleUpdate…). Perhaps I'm just mislead by log entries collecting multiple "Matched Data:…" entries, and there aren't any rules with multiple logdata:… options.

exec: and append: and thelike I haven't really seen used in the CRS rules (egrep 'setuid|setsid|prepend|exec:|proxy|redirect' /usr/share/modsecurity-crs/rules/*.conf). And I would think they're not iterative, but singular. OTOH the manual says "Non-disruptive", so strictly speaking "exec", "append" and "prepend" aren't exclusive actions like block/deny/etc. Much unlike "redirect" and "proxy" seemingly.

But sanitiseArgs/Matched/… or setuid:/setsid:/setrsc: seem similar in scope to setvar:. Yet again it's a little unclear if they would be inherited, or overwritten by a SecRuleUpdateActionById.

The ctl:* flags seem less crucial, since they're largely boolean flags they're surely unaffected by SecRuleUpdates.

It turns out that exec is a repeat option, but append/prepend for example are not. The rest are sort of what you'd expect.
Made a little table from v2/re_actions.c:

3
what is the impact of increasing the SecResponseBodyLimit from default value (512k) to (5M)?
0
Mod Security2 deactivation rule only from a specified IP addresses
1
Which versions of Apache are currently supported?
2
Steps to find the specific rule for Mod_security
1
Apache2 error "ModSecurity: Found another rule with the same id" Ubuntu18.04
1
Rewrite Rule from .htaccess into Apache VirtualHost