Is it normal in Windows implementation of DHCP Server and DHCP Client that some clietnts gets strange long lease expires time like 15 days? ,,Lease duration for DHCP clients'' setting in DHCP Server is set to 2 days.

The lease time is fixed for all clients in the same DHCP scope because it's scope-based setting. 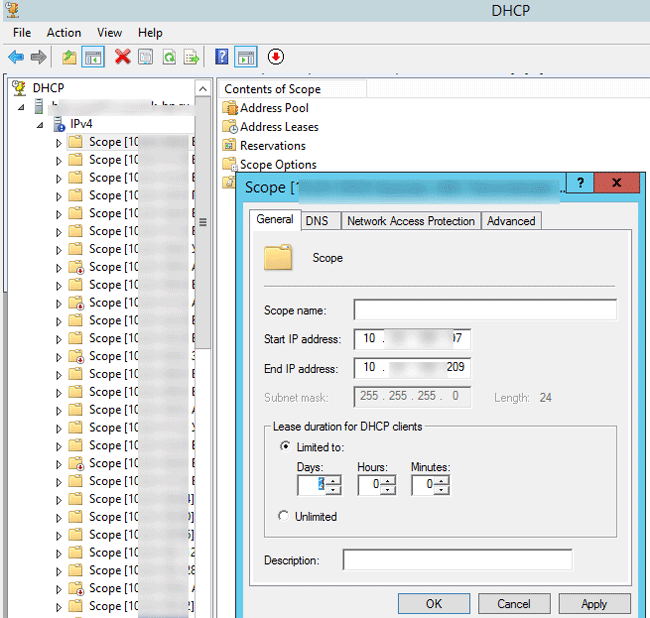 Clients in the same scope have the same initial lease time but it can be prolonged by the client request. A DHCP client automatically attempts to renew its lease as soon as 50% of the lease duration has expired. The DHCP client will also attempt to renew its IP address lease each time that the computer restarts. To attempt a lease renewal, the DHCP client sends a DHCPREQUEST packet directly to the DHCP server from which the client obtained the lease.

If the DHCP client fails to renew its lease the first time, then the DHCP client broadcasts a DHCPDISCOVER packet to update its address lease when 87.5% of the current lease duration expires. At this stage, the DHCP client accepts a lease that any DHCP server has issued.

Not the answer you're looking for? Browse other questions tagged windows networking dhcp dhcp-server dhclient or ask your own question.

23
What is a good DHCP lease timeout configuration
13
What does a DHCP-client consider to be the "best" answer?
4
Incorrect lease times from Windows 2012 R2 DHCP
2
set unlimited lease duration throuth CMD
20
What are the possible issues in using very short DHCP lease time (< 1min)?
2
Different lease time for all clients DNSMASQ
0
DHCP attribution without DHCP client
2
Is there any lower bound on DHCP lease time?