Trying to get a basic MDT deployment process setup. Right now, for testing, I have MDT loaded with a full set of install files from the Win 10 Ent x64 ISO. I'm using PXE boot via WDS to point over to the MDT boot image. During the task sequence it gets to Installing Operating System and makes it to 100%. Then it jumps to an error that I haven't been able to work out yet.

Any help would be appreciated.

EDIT: Forgot to mention, I did already go through this process since the VM is running in BIOS mode: https://support.microsoft.com/en-us/topic/windows-10-deployments-fail-with-microsoft-deployment-toolkit-on-computers-with-bios-type-firmware-70557b0b-6be3-81d2-556f-b313e29e2cb7 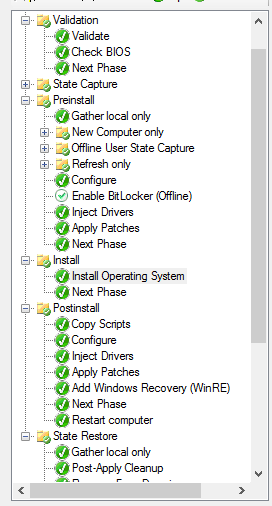 I had exactly the same error and the fix from Windows 10 deployments fail with Microsoft Deployment Toolkit on computers with BIOS type firmware helped me. Perhaps you missed a step from the instructions?

You can see in Wireshark whether you have the same problem as the one solved in the article. Set the filter to "dhcp" and at one of the steps, the client returns the ia64 architecture instead of the desired one.

Not the answer you're looking for? Browse other questions tagged deployment mdt or ask your own question.