Offloading PPPoE from an OPNsense router

I'm running opnSense, a FreeBSD-based firewall and router similar to pfSense, in a virtual machine under VMware ESXi 7 on a Dell PowerEdge R230, as a router for my home network. No other VMs are running or even set up on the host, just this one.

My ISP uses symmetrical gigabit fiber. You connect to it via PPPoE with VLAN tagging. The IP is dynamically assigned, although it's unclear if it's DHCP or not. Either way, I get assigned a single IP not of my choosing. I don't have any static IPs nor a static block, something for which my ISP charges a non-trivial amount. Reconnecting often does give me a new IP, so I can't assume it would stay the same all the time.

I set up a gateway for the ISP in opnSense. opnSense does the PPPoE connection and for simplicity ESXi itself does the VLAN tagging so it's transparent to the underlying switch. The topology ends up looking like this:

The NICs in ESXi look like this. The first two are the onboard LAN. The last four are the PCI-E card: Dell Intel I350-T4 Quad Port 1GbE PCI-E card. The ISP's connection is using vmnic2, the first port on the PCI-E card. 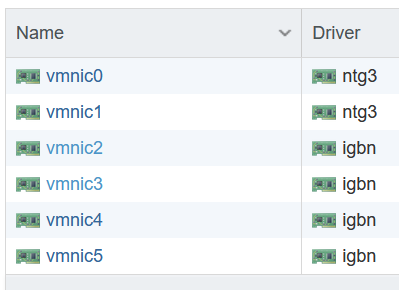 But, the problem is I'm not getting the full speed. This is because FreeBSD has a bug with some NICs where PPPoE does not use all the CPU cores. The VM has what I'd consider overkill assigned to it: 4 vCPUs from a Xeon E3-1240 v5 (3.5 GHz) and 8 GB RAM, but apparently the single core performance isn't fast enough to do gigabit due to PPPoE. When I do a speed test, the CPU usage within the VM predictably goes to 25% (one of four cores) and I only get about 600 Mbps peak download, and for some reason upload is much worse than that too. When I use other hardware, like a Ubiquiti UniFi USG-3P or the ISP's provided modem/router, I get the nearly the full speed both directions. I've tried making the virtual NIC both vmxnet3 and e1000e with no difference in performance.

So with this setup, how can I get full speed with a PPPoE connection? I see several options but I don't know which is the best or the most likely chance of success:

Not the answer you're looking for? Browse other questions tagged routing freebsd pfsense pppoe opnsense or ask your own question.