I created a password protected directory using .htaccess and .htpasswd, but the files don't show up when I go to the directory URL.

I have this in my .htaccess: 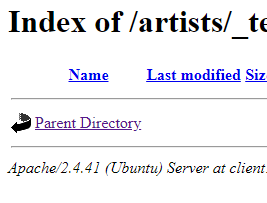 I'm protecting the CSV files in that directory. They disappear when that auth directive is set. It shows up when I remove it. I want to be able to at least see the files, but when accessing these files it would offer a auth prompt.

An alternative to using the <FilesMatch> directive is to use an <If> expression and test against THE_REQUEST server variable instead. This is then only successful when the .csv files are actually requested by the user and not when browsing the directory listing.

THE_REQUEST contains the first line of the HTTP request. eg. GET /foo/test.csv HTTP/1.1 (in the case of a GET request for /foo/test.csv) - and does not change throughout the request. So when requesting the directory itself, eg. /foo/ then the enclosed block is not processed and the listing of these files are not blocked.

The added complication is that THE_REQUEST contains the entire URL as requested, which could include a query string. So, the check for (\s|\?) (ie. whitespace or a literal ?) is to avoid the password check being bypassed by simply including a query string. eg. /foo/test.csv?anything.

Not the answer you're looking for? Browse other questions tagged linux apache-2.4 permissions .htaccess htpasswd or ask your own question.

10
how to configure apache to view hidden (`.`) files?
1
Replace AuthUserFile with the password itself or reference a relative path to the folder