I have a staging environment in GCP as a separate project. Inside the project, I have a test VM where I can deploy components for testing against our internal services. Most of our services are deployed in northamerica-northeast1, but because I am working from the Netherlands, I've put my test VM in europe-west4. We're also using Tailscale to access VM instances in GCP from our local development machines, and so I would like to be able to connect to my test VM in europe-west4 from my dev box over Tailscale.

I've been digging through the Firewall rules we have for our network, and it seems like this connection should definitely be allowed. We have a default-allow-internal rule that allows ingress traffic from 10.128.0.0/9 to all instances (and we only have explicit Allow rules in our firewall). For good measure I also added an allow-tailnet rule that allows ingress from 100.64.0.0/10, but that doesn't seem to have helped (and, if I understand correctly, the CGNAT IPs should only be used inside the Wireguard IP paths anyway).

I've tried setting up a Connectivity Test from 10.162.0.18 (our Tailscale gateway) to my test VM, which gives me this result: 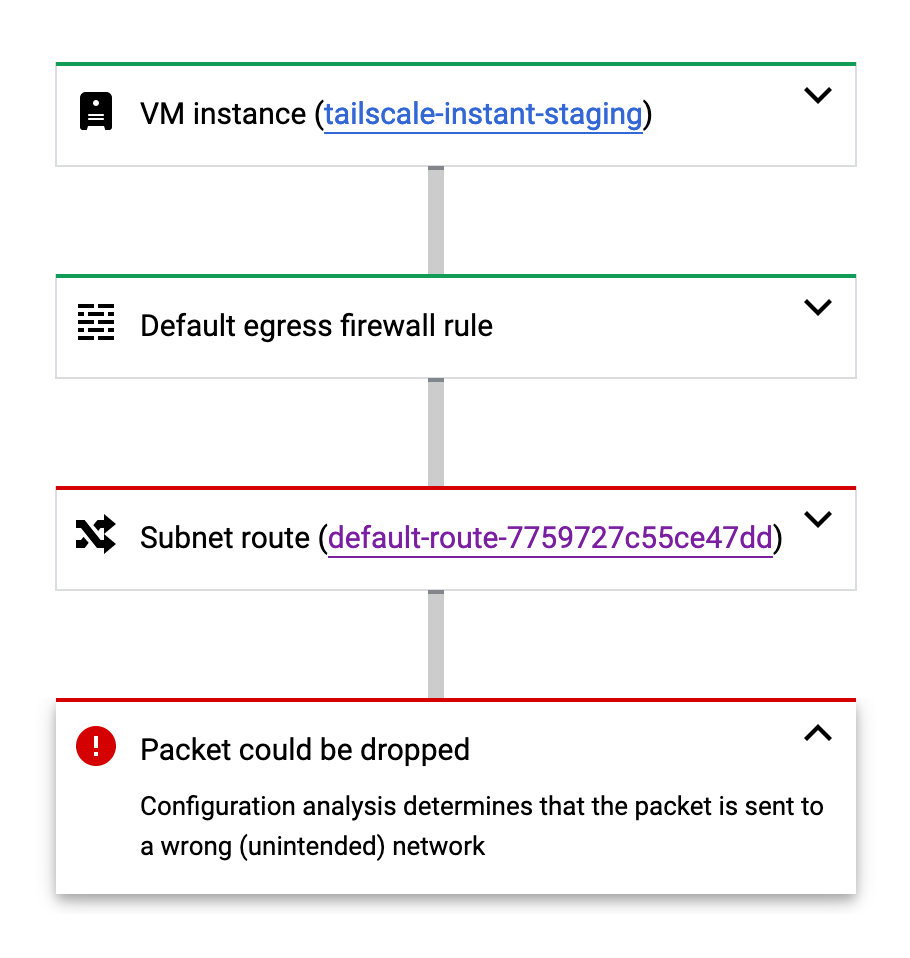 Any suggestions for what I might be missing? Would be much appreciated!

Have you checked the routing mode for each cloud routers VPC? You'll need to ensure the routing is set to global if you want to learn routes to the other regions.

0
Do network tags work across peered VPCs on Google Cloud?
0
How to start an instance from another instance in the same project (GCP)
3
How to create GPC firewall rule to allow traffic between GKE clusters
0
GCP - GKE Setup: Error during load balancer auto generation
0
migrating AWS instances to GCP with new velostrata GCP migrate 4.11
0
GCP Image in new zone fails to have network connection
2
Is there a way to set custom authentication on GCP API Gateway?
0
How to configure Firewall Rules and DNS settings on GCP with VPC Service Controls when using Cloud Composer and Cloud Functions in the same project?
1
GCP Compute Instance stuck "stopping"