Need help determining what is eating my internet connection at work

I am the Net Admin for my company and we currently have a T1 connection to the internet but are only getting speeds of around 150kbps down and close to 1.5 Up. I am not sure how to go about figuring out what machine on my network could be doing something they shouldn't or possibly has a virus. We have close to 100 PC's on our network so to load software on each would be a bare. Is there any network tool I can use that will tell me what machine is using all the bandwidth so that I can see if it possibly has a virus. I am here at work tonight being the only one here and the internet connection is terrible so that is why I am thinking I possibly have an infected computer and just don't realize it.

It sounds like a smaller network so to keep it simple I would do a rough check whether there actually is an internal problem, say by disconnecting it for a while and connecting a single pc to the ASA - to see if the assumptions are correct. If so, dig out the tools suggested - if not, the problem is outside your network ^^

You'll need a copy of your outgoing network trafic ... and can then use a tools such as ntop ( http://www.ntop.org/) to monitor the bandwith usage.

darkstat should do a fine job of letting you in on that quickly and assuming you have a BSD/Linux firewall you should be able to build it no problem.

Since you're only concerned with the traffic transiting the T1, here's what I would suggest:

There are a number of different ways to accomplish this but maybe the easiest thing to do is to install PRTG (assuming you're running some version of Windows) on your workstation. In PRTG set up a packet sniffing sensor. On the switch that your ASA connects to set up a port monitor to mirror traffic on the ASA switch port to the port that the PRTG computer is running on. This will show you not only the total volume of traffic transiting the ASA switch port (to and from the internet via the T1), but will also show you the volume of traffic based on protocol, source, and destination. If you don't know how to set up a port monitor or if your switch doesn't support port monitoring, you can plug a hub in between the ASA and the switch and plug your PRTG machine in to the same hub in order to see all of the traffic transiting the ASA.

Some additional info based on your comment to my answer:

The ASA can send netflow data(though you might have to upgrade it first). You can use that with any software that can receive netflow(like ntop).

In a pinch you could try just running show conn and looking for something out of the ordinary.

I bet this problem was solved a long time ago, but just in case someone needs something similiar, I'd suggest you to use a laptop running Wireshark.

Just let it run for a while to check who's consuming your bandwidth. The only problem is to find where you connect it. If you have a hub then you can connect it between you router and your LAN switch. Otherwise it might be a little tricky. In a Cisco switch you'd have to configure a SPAN port:

TIP: To avoid getting a huge ammount of data, limit each captured packet to 96 bytes (you should adjust it to the smallest number that would show the entire protocol header you are analyzing though) as you don't need to know the contents of your payload (at least on the first analysis): 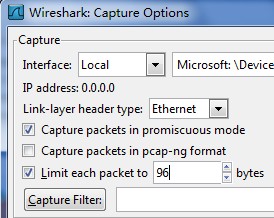 Then after capturing a fair ammount of data, go to Statistics > Conversations, sort by the Bytes column and voilà, you catch the bad guy.

5
How much traffic can one machine generate?
1
Slow internet bandwidth on Network
1
Weird network/internet problem. Need some input
5
Need help diagnosing network performance issues
1
RDP Over Mobile Satellite Internet
4
Should Server Internet Connection be based solely on Internet Speed?
1
Does a Bonded NIC need more than one internet connection to be effective?