Anyway, I now I realize I don't know anything about laptop hard drives. I was just going to take one out of another laptop and stick it in but the connectors are the same.

How do you shop for laptop hard drives?

Modern alternative to mechanical HDDs are Solid State Drives, based on flash memory. They have almost instantaneous seek times, incredible read speeds and very low power consumption. As of now they are still much lower capacity than similarly priced HDDs. However, with the effects of Thailand floods and sharp drop in SSD prices in recent years, there are no longer excessively expensive. SSD can come in 2.5" SATA form factor, thus be interchangeable with 2.5" HDD. Another form factor, unique to SSDs is Mini-SATA (mSATA), intended mostly for use with netbooks (and some ultraportables). Below mSATA drive on top of 2.5" SATA HDD for size comparison: 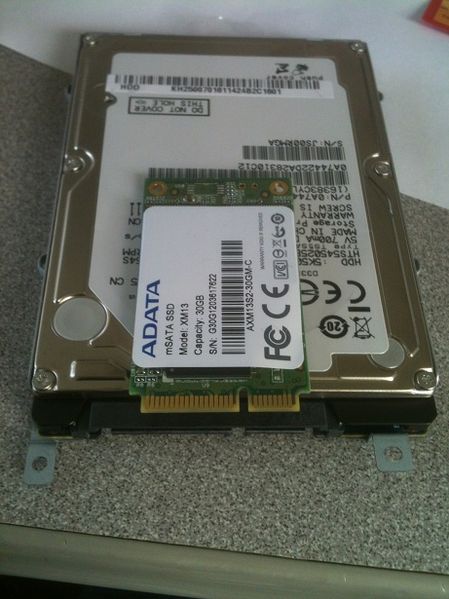 Note, that ultrabooks use neither of these formats. In ultrabooks SSDs are soldered permanently onto motherboard, thus cannot be removed nor upgraded.

You asked how to shop for notebook hard drives. I prefer to hit my favorite review sites and look in their storage review sections. One of these always seems to have a good comparison review between hard drive vendors:

The one thing to be aware of is that there's some high-capacity drives that are taller than other drives. Your laptop may only tolerate a 9.5mm high drive, for example - so don't go buying a 12mm high drive unless you know it'll fit.

There are, really, only two types of drive connections: Regular old IDE (PATA) and SATA. Each use their own connector, and more importantly data transport protocol. So you have to buy the correct interface for your laptop. That being said most laptops will have another, specialized, connector that actually hooks the drive into the controller. As a result it can, on first blush, be non-obvious whether you are working with a SATA or PATA drive. That connector, however, should come off the old drive easily. Once you've figured out whether you need IDE or SATA look for 4 things. Size, Speed (rotational and seek time), Cache, and Warranty. First, figure out the size that you want, then try to maximize the rest based on the price you're willing to spend.

After installing a new ATA hard drive, don't use more space than is recognized by the BIOS. Otherwise there will be an addressing overflow and data will be written at the beginning of the drive and trash the boot sector. (Learned the hard way).

Not the answer you're looking for? Browse other questions tagged hardware hard-drive laptop or ask your own question.

2
How is made sure magnetic or electric fields from devices like transformers or fans close nearby do never affect hard drives?
0
3 hard drives fail with 2 enclosures and 2 pcs
4
Windows 7 laptops stalling, waiting on harddrive
0
Multiple Enterprise-level Western Digital hard drives failing
6
Could SpinRite possibly be messing up my laptop hard drives?
5
Is my hard drive about to die?
1
ESXI 5.5 Doesn't see full hard drive
7
Win7-10, can you mount an NTFS hard drive and ignore permissions like Win XP?
9
Using non-certified hard drives in Dell MD3220 storage array