Most discussions of ZFS suggest that the hardware RAID be turned off and that ZFS should directly talk to the disks and manage the RAID on the host (instead of the RAID controller).

This makes sense on a computer with 2-16 or even more local disks, but what about in an environment with a large SAN?

For example, the enterprise I work for has what I would consider to be a modest sized SAN with 2 full racks of disks, which is something like 400 spindles. I've seen SAN shelves that are way more dense than ours, and SAN deployments way larger than ours.

FWIW I have experience with up to 92 disks in a single ZFS pool and so far it works fine.

But if you're really talking about several hundreds of disks I would consider partitioning them into a small number of disjunct (but still large) pools. I don't want to know how long e.g. a zpool scrub runs on a 3000 disk pool (but you want to scrub regularly). Also the output of commands like zpool status would be unwieldy with such a large number of disks. So why put all eggs into a single basket?

(Side note on dedup: Notice that although dedup can be controlled at the dataset level it will find duplicates at the pool level. I.e. you'll probably get worse dedup results if you're partitioning as suggested. On the other hand you'll need much more memory to hold the dedup hashes of a single giant pool which might not fit into ARC+L2ARC if the pool's too big. So if you are using dedup the amount of available memory is probably a good indicator for the maximum practical pool size.)

We let our SANs manage the RAID. Why spend money on all that battery backed NVRAM and those dedicated processors and then offload the work onto the server, whose CPUs I want doing something other than RAID checksums?

Here is a website you may want to look at to consider size and configuration of the pool(s) for probability of data loss.
https://blogs.oracle.com/relling/entry/zfs_copies_and_data_protection 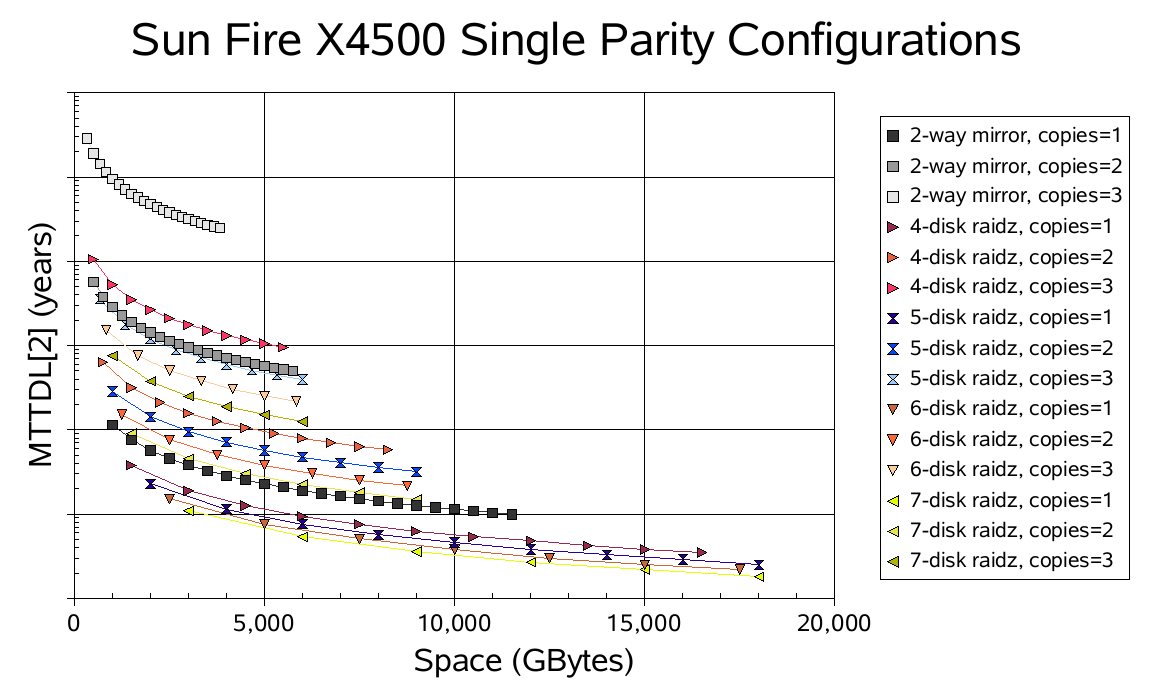 It's an old question but it's just a relevant today as it was 7 years ago!

To answer the first part of the question, I'm not aware of what we would call a "SAN" that would ever expose the raw disks to a server that could run ZFS. A SAN by definition only presents block storage (LUNs) or perhaps with something like a Filer/FS presents a NFS or CIFS. There are some "SANs" that actually run ZFS internally, but this is largely abstracted away - the disks are never exposed to a server, instead the "Filer" component of the SAN presents block or network file systems to servers.

A device that presents the raw disks (over SAS or less likely over FC) is a DAS. To run ZFS, typically you'd be telling the RAID controller to present the disks as a JBOD.

However should you use ZFS on a LUN presented by a SAN? Possibly: ZFS vs for instance EXT4, provides a few extra features such as scrubs that check checksums or for running snapshots. A scrub probably can't auto heal in the same way that it can if it is doing the disk RAID, but it can still alert you to corruption, helping to prevent bitrot. The snapshots you can create on, for example, a Linux SAMBA fileserver are vastly superior to what you can do with EXT, these can even be exposed in Windows as "Previous Versions).

If you don't give ZFS redundant data to work with (e.g. mirrors, RAID-Z), then you lose many of the benefits of using it. The number of disks involved won't change that fact. However, whether that matters really depends on your environment. You have to determine what storage features you need (a potentially labor-intensive analysis) , and then go hunting for the least expensive solution (you can afford) that meets your needs. That may mean using ZFS everywhere along with specialized Oracle storage devices (some people do that and have many disks exposed to ZFS without problem, and use Oracle tools to do management), it may mean using only enterprise SAN products, or it may mean using some hybrid (in which case you'll probably have to develop some tools and processes on your own to manage the environment). Don't forget that your analysis needs to account for the human element as well (e.g. maybe you have a team of Storage people who have highly useful and specialized training with a SAN product which you would lose if you went to an all ZFS solution).

Not the answer you're looking for? Browse other questions tagged storage-area-network zfs or ask your own question.

11
How do you backup a SAN?
3
How to best tune Dell PowerVault MD3600i SAN/Initiators for best performance?
25
For L2ARC and ZIL: is it better to have one large SSD for both, or two smaller SSDs?
33
ZFS best practices with hardware RAID
6
ZFS Poor Write Performance When Adding More Spindles
9
Can ZFS using snaphots replace DRBD using sync protocol A?
1
What is the best ZFS configuration for logging purposes?
3
ZFS protection against bit rot and silent corruption without RAIDZ
4
Differences between HW RAID and ZFS