It seems like no matter how strict and careful we are in our closets when we set them up, they eventually turn into a giant knot.

In part I blame the fact that we've got a rather large number of people who go into the closets and move things around, but I can't really change that.

What I can change is the way we arrange our racks and patch panels and switches.

At the moment, we've got the patch panels in a group (with wire managers between them) and a feet below them we've got our switches.

Are there any problems with using 6 inch patch cables?

Personally, I try to put the switches as close to the patch panels as possible. Typically, I'll put a 48 port switch between 2 24 port patch panels. So it goes like:

Then, I use 6" patch cables to connect the panel to the switch. The benefit is that everything is nice and neat, and organized... Then, any infrastructure related cabling (connecting switches, etc) I run out to the side of the rack and then up/down to where it needs to go...

I would also like to also suggest getting patch cables in different colors. Each color could be for a department, vlan, printers, servers, voip, etc.

I have no problem using any patch cable that fits the application. If I need a bundle of 10' cables, or 24 6' ones to go from one panel to the switch, fine with me.

On a personal note, I prefer to run cables from the patch panel down to the switches, rather than have longer cables that go off horizontally, then down the side edge of the rack, then horizontally into the switch.

Surely 6 inch cables are just too limiting, get the longest ones you can and loop them together to keep things tidy. 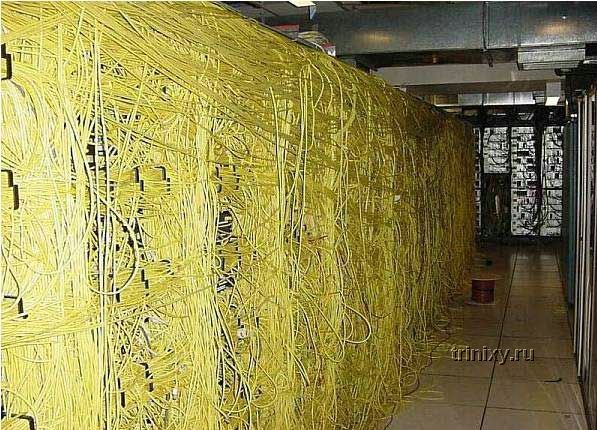 or.. make or buy (if you can) some cables that are just long enough (but not so short that you put strain on the plugs - give it an extra inch or two for wiggle room). Our cables tend to be the long ones, but they are all pulled to the side, kept together and the other end pulled in - like you have a box of cabling at the side of the rack to store the main cable, pulling the ends out. That's tidier in many respects as you can still get your hands in there to change them, the cables aren't in the way. This is the main reason I can think of why very short cables would be a disadvantage. Similar to what you show in your pic, but a lot more disciplined - no cable gets added that isn't first put with the bundle on the side. Don't forget to label both ends though!

They sound like the ideal solution to your problem - assuming that you can get everything 6 inches apart.

If not you could just make some custom length cables that are just long enough for where things currently are.

I recommend 24" cables and putting the switches above/below/between the patch panels they will service. Given that most racks are 19", this gives you enough room to run a cable from one side of the rack to the other (if necessary), while reducing the slack you have to deal with. Using shorter cables is fine, until you need to recable something, or move a patch port to another switch port, then you're stringing in a new cable. Admittedly it doesn't reduce slack nearly as much as 6" cables would, but the down-the-road flexibility is much handier, IMHO.

That said, for stuff that you're going to set and forget, doing a quick mock up of the rack(s) in question, figuring out the best paths and runs, then either custom-cutting/testing the cable yourself, or overnighting some close-to-length cables from someplace can make an otherwise ugly situation look incredibly nice. I did this with the last rack deployment I did, going as far as to get shorter power cables and color-coded Cat5 (for DRAC, Public vs private network, etc). The back of the rack looks clean, simple, and awesome. not to mention well-ventilated.

The main downside with a cable as short as 6" is that you may end up with problems if you use it to directly connect two interfaces, but for a patch between a panel and a switch (or two panels), it should be just fine.

Your basic problem is a complete lack of a methodical approach to cabling. The use of such absurdly long patch leads, as shown in the photo, just makes it near impossible to be properly organised.

Before you touch another cable sit yourself down and give serious though to the result you want, rather than how to fix what you have. If you don't have a final objective everything you do to that cabling will still end up messy and hard to work with.

One of the most important things to consider is how you are going to know which cable connects to which end points, without having to trace that cable. I use a MS Access database for that, because it's easy to use and I can produce reports in any convenient format. Several of those reports are printed out and hung on the rack. Any cabling changes get updated on those sheets and later entered into the database.

As to the cables themselves, I prefer to make my own to whatever length is called for. If you don't want to do that I suggest getting a bunch of different lengths and using the appropriate one each time. There's certainly nothing wrong with 6 inch cables in and of itself, if that's appropriate to the situation in which they are used.

Her's a shot of part of a rack I tidied up.

Not the answer you're looking for? Browse other questions tagged ethernet cable-management or ask your own question.