What to filter when providing very limited open WiFi to a small conference or meeting?

The basic question is: if you have a very limited bandwidth WiFi to provide Internet for a small meeting of only a day or two, how do you set the filters on the router to avoid one or two users monopolizing all the available bandwidth?

For folks who don't have the time to read the details below, I am NOT looking for any of these answers:

I am aware of all of that. None are appropriate for reasons that will become clear.

ALSO NOTE: There is already a question concerning providing adequate WiFi at large (>500 attendees) conferences here. This question concerns SMALL meetings of less than 200 people, typically with less than half that using the WiFi. Something that can be handled with a single home or small office router.

I've used a 3G/4G router device to provide WiFi to small meetings in the past with some success. By small I mean single-room conferences or meetings on the order of a barcamp or Skepticamp or user group meeting. These meetings sometimes have technical attendees there, but not exclusively. Usually less than half to a third of the attendees will actually use the WiFi. Maximum meeting size I'm talking about is 100 to 200 people.

I typically use a Cradlepoint MBR-1000 but many other devices exist, especially all-in-one units supplied by 3G and/or 4G vendors like Verizon, Sprint and Clear. These devices take a 3G or 4G internet connection and fan it out to multiple users using WiFi.

One key aspect of providing net access this way is the limited bandwidth available over 3G/4G. Even with something like the Cradlepoint which can load-balance multiple radios, you are only going to achieve a few megabits of download speed and maybe a megabit or so of upload speed. That's a best case scenario. Often it is considerably slower.

The goal in most of these meeting situations is to allow folks access to services like email, web, social media, chat services and so on. This is so they can live-blog or live-tweet the proceedings, or simply chat online or otherwise stay in touch (with both attendees and non-attendees) while the meeting proceeds. I would like to limit the services provided by the router to just those services that meet those needs.

In particular I have noticed a couple of scenarios where particular users end up abusing most of the bandwidth on the router, to the detriment of everyone. These boil into two areas:

For some numbers on how much network bandwidth gets sucked up by these non-web, non-email type services, check out this recent Wired article. Apparently web, email and chat all together are less than one quarter of the Internet traffic now. If the numbers in that article are correct, by filtering out all the other stuff I should be able to increase the usefulness of the WiFi four-fold.

Now, in some situations I've been able to control access using security on the router to limit it to a very small group of people (typically the organizers of the meeting). But that's not always appropriate. At an upcoming meeting I would like to run the WiFi without security and let anyone use it, because it happens at the meeting location the 4G coverage in my town is particularly excellent. In a recent test I got 10 Megabits down at the meeting site.

The "tell people to police themselves" solution mentioned at top is not appropriate because of (a) a largely non-technical audience and (b) the unintentional nature of much of the usage as described above.

The "run a sniffer and filter as needed" solution is not useful because these meetings typically only last a couple of days, often only one day, and have a very small volunteer staff. I don't have a person to dedicate to network monitoring, and by the time we got the rules tweaked completely the meeting will be over.

First thing, I figured I would use OpenDNS's domain filtering rules to filter out whole classes of sites. A number of video and peer-to-peer sites can be wiped out using this. (Yes, I am aware that filtering via DNS technically leaves the services accessible - remember, these are largely non-technical users attending a 2 day meeting. It's enough). I figured I would start with these selections in OpenDNS's UI: 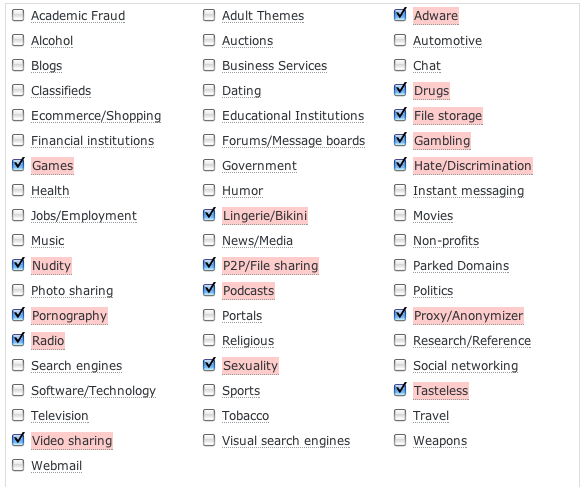 I figure I will probably also block DNS (port 53) to anything other than the router itself, so that folks can't bypass my DNS configuration. A savvy user could get around this, because I'm not going to put a lot of elaborate filters on the firewall, but I don't care too much. Because these meetings don't last very long, its probably not going to be worth the trouble.

This should cover the bulk of the non-web traffic, i.e. peer-to-peer and video if that Wired article is correct. Please advise if you think there are severe limitations to the OpenDNS approach.

Note that OpenDNS focuses on things that are "objectionable" in some context or another. Video, music, radio and peer-to-peer all get covered. I still need to cover a number of perfectly reasonable things that we just want to block because they aren't needed in a meeting. Most of these are utilities that upload or download legit things in the background.

Specifically, I'd like to know port numbers or DNS names to filter in order to effectively disable the following services:

Sorry to be so verbose, but I find it helps to be very, very clear on questions of this nature, and I already have half a solution with the OpenDNS thing.

This will give you a great start. It'll kill most of the bandwidth hogging protocols. It'll also block a lot of VPN connections (not ssl vpns though) which should help prevent people from bypassing your security.

If you have a firewall capable of blocking filetypes, you should probably also block exe, bin, com, bat, avi, mpeg, mp3, mpg, zip, bz2, gz, tgz, dll, rar, tar and probably a bunch of others I'm leaving out.

Other than that, your current restrictions are probably decent enough. You can add updates to the list. Personally, I wouldn't block A/V updates. If you really want to, you can block their entire domains (*.symantec.com, *.mcafee.com, *.trendmicro.com, etc). Microsoft update URLs are available at http://technet.microsoft.com/en-us/library/bb693717.aspx

Using OpenDNS will not block torrents.

It will only block their ability to find new torrents online and add them to their queue.

If they walk in with 5 torrents halfway done, and then link to the LAN via WiFi, wham, all of the torrents will resume and take all available bandwidth. A careful read of the OpenDNS website points this out. And if you think about how DNS works, it makes sense.

Blocking existing torrents is difficult. Your smartest move is to limit the number of maximum connections to 60-100 per user, right in the radio. iTunes and Torrent open thousands.

First off, any one wifi router is really only good for around 60 or so connections, so the worst case of your 'less than 200 people with less than half using wifi' (99 users) may still require at least one more router.

Secondly, you should look into traffic shaping... ideally you want to give every IP on the inside the same guaranteed minimum bandwidth and let them fight over the extra... that way no one gets shut out but anyone can still burst to full capacity.

I would suggest you to see if your routers can use a custom firmware like DD-WRT. With it you can use QOS that would be really what you are looking for.

278
What are the obstacles to providing reliable Internet access and Wi-Fi at large tech conferences?

1
Flash Plugin - How to disable automatic updates on a computer that is offline?
2
Why are my listener-less multicast packets affecting Wifi performance?
6
Should I be on different Channels for this WiFi network?
3
Is there a good way to keep IPv6 multicast packets off WiFi?
21
RTS threshold, fragmentation, and other advanced WiFi settings
3
wifi routers and concurrent devices
0
LAN users not listed over wifi
5
How should I secure a corporate wireless network?