Is there a standard for running audio/video over CAT5/CAT5e UTP?

I want to use CAT5e UTP cabling to carry audio and video over distances of maybe 150 feet or so.

I plan to use the CAT5e cable as follows:

I may also use the CAT5e cable as follows:

I have had success in the tests I have performed, and believe it is because CAT5e is rated to 350 MHz, while the video signal is only a fraction of that bandwidth, and the audio channels are even narrower.

I plan to install runs of CAT5e between the source (VCR/DVD player or computer) and the display (TV or DLP projector) in dozens of rooms, and want the inheritor to be able to pick up where I left off without scratching his or her head any saying 'WTF?'.

Are there existing standards for either of these applications, as far as which color wire pairs to use for what?

Are there any good sources for CAT5e wire-color-coded punchdown (110-style) keystones or wallplates that terminate into red/white/yellow female RCA jacks or red/white female RCA jacks and a female s-video jack?

The thing you're looking for are called Baluns:

For Distributing Audio/Video Via Cat5 Cable

Today's A/V industry has created the need to send high resolution audio and video signals over increasingly long distances of cable. However, the size and cost of the video cabling, especially when long lengths are involved, had created a challenge. As needs and technology change, future cable replacement can be quite costly.

A solution has been developed to tackle this problem. By placing "balun" adaptors at each end, signals can be adapted to be effectively sent over long distances of Cat5 cable.

i found a company that has a whole product page of them.

One of the product pics has this schematic on the actual device: 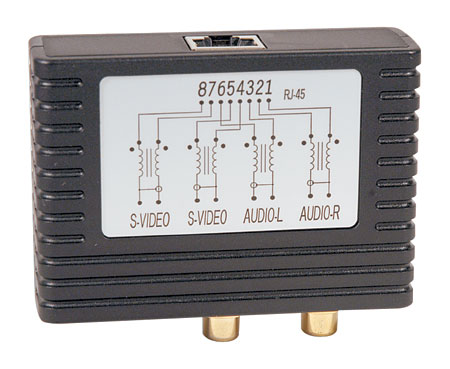 So you can steal their pinouts and use that.

I am aware that this not so much what you are looking for but you may be interested. Check out the DLNA standard. It uses networking cabling and protocols to transport video information.

Sonance is providing an adapter for their own audio/video-system, that could fit your needs.

Not the answer you're looking for? Browse other questions tagged cable cat5e cat5 distribution or ask your own question.

0
Flat 8-conductor cables for a serial console. What are they called?
5
How to wire a patch panel with incomplete labels
0
CAT5e RJ45 splitter with CAT6 network: compatibility & performance
4
Sanity Check: Is my CAT5e cable probably bad, or do I just need different connectors?
6
What is a DB 9 to 3.5mm quad plug cable used for?
4
TIA 568A vs. B Wiring for Long Ethernet Run