SETUP:
Windows Server 2003 SP2 with a replication error (this is the only DC in the domain) [image below]: Journal Wrap Error on sysvol share 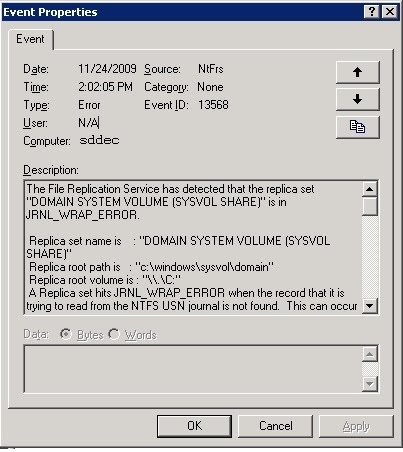 There isn't any "corruption". Rather, too many changes happened in the NTFS volume that hosts the SYSVOL in a short period of time, overflowing the NTFS change journal. Rather than explain it in detail, I'll direct you to some background on what causes journal wrap errors in this blog posting.

The two recovery methods are described in this Microsoft KB article.

Since you have no replication partners you should be fine performing an authoritative restore (as described in that KB article). In multi-DC scenarios this is not the preferred method.

Basically, you'll stop the File Replication Service (FRS), set the "burflags" registry value to "D4" (the full path is in the article), and restart the FRS. That should get you back up and running.

Before you try any of that, though, I'd at least make a current System State backup to disk.

You might want to think about getting a second DC after all of this is said and done. It's cheap insurance, makes disaster recovery a LOT easier, and in this scenario would've preserved client access to Group Policy during the outage.

Not the answer you're looking for? Browse other questions tagged windows-server-2003 replication domain-controller sysvol or ask your own question.