Real time monitoring of MS Windows servers and their services

We have a bunch of large HDTVs in our monitoring office keeping an eye on all of our production equipment.

At the moment we use

All of this is fine apart from the Perfmon part - it gives us what we want - i.e. real time charts on the screen, logging certain performance counters, etc - the only problem is setting it up is a real chore. If the Vista PC running Perfmon is rebooted (normally due to Windows Update) then setting all the counters up again takes ages - literally an hour or two's worth of work for somebody in the office...

Anybody know of a way to either: 1. Script adding Perfmon counters 2. Another tool with graphical output and WMI/windows counter access.

I would seperate out the charting/display from the montioring/alerting piece. You haven't said how many object you have. For most shops I'd write a powershell script to get the counters I want and pipe the output to powergadgets and for small shops use polymon to monitor the windows stuff and groundwork to monitor the rest. In a larger environment (30+ servers) I'd take a look at System Center Operations Manager for monitoring and alerting. You have to realize howver that SCOM is NOT just monitoring. It's designed to correct problems and ensure business service, unlike most monitoring software that only cares about server counters. Other options would be tivoli or openview.

I highly recommend Zabbix to system administrators looking for monitoring and graphing solutions.

Zabbix has clients (agents) for Windows and Linux systems. They can also read SNMP packets to graph and monitor stats from just about anything.

I've been using it for 3 years and it has been (relatively) very easy to manage and keep updated.

They even have application monitoring if you are willing to script the actions for it. 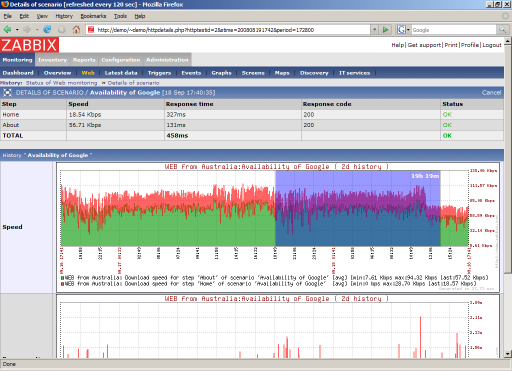 Let me know if you have any specific questions about usage.

if not realtime charts [ that is with few minutes sampling time ] are ok for you - take a look at Munin Node for Windows. alternatively you can probably fetch plenty of statistics from windows via snmp but i've tried it long time ago and abandoned idea quite quickly. munin-node was just enough.

Perfmon can be scripted, and the settings can be saved in Vista. Perfmon can even logged to a MSSQL database. Here's how to do it.

PROTIP: You can setup your single vista machine to also remotely log perfmon data from other systems.

And here's how you can generate a report or two from the data you've collected.

Otherwise I would go the Nagios/RRD route as joseph suggested.

"Another tool with graphical output and WMI/windows counter access..."

For extremely configurable real-time display, (all the same data sources) a variant of the same product is PolyMonRT

Admin Arsenal has a great perfmon monitor with graphical charting. It's free to try.

It is understandable that the setup of 4 different monitoring tools can be quite a lot of work. Since you are already using nagios (the best opensource monitoring tool ever) I would consider integrating all the functionality for your monitoring in the same place (NAGIOS). I have used nagios to monitor all elements you have in your system (sql server, network devices, windows machines...) and more (linux servers, solaris servers, java applications, etc). My recommendation for you is the following:

Samurize is great for designing visual realtime perfmon displays. You design everything in an editor, including graphics and overlays. It can run as a widget on the desktop or in the background, generating image files periodically.

After you have added all the counters you can save the resulting config as an msc file. Then just open the .msc to reopen the monitor.

Will logman let you script Performance Monitor to your satisfaction? I also found a script which may help.

Use RoboTask to simulate mouse and keyboard activity, since it sends virtual mouse clicks and keystrokes it can automate any given task in any application. You can setup a task that runs at startup or at a scheduled time, and watch in wonder as your computer automatically does your "chore" jobs as fast as the application can respond. (if your app hangs up for 10 minutes, obviously you'll have to delay the script for 10 mins)

RoboTask can even communicate with instances of itself on other computers, thereby allowing you to "centrally" control/start many tasks at once. Conditions and Loops are also available for those with basic programming knowledge.

"Writing" a task is something like working with scripts, just that you won't be typing anything since all the available "commands" are listed down with custom GUIs. You'll have to specify delays between each action to give time for the program to respond, even if the delays are in milliseconds.

Alternatively you can use Automation Anywhere, that is easier to configure since you can "record" your activity and then let it "play back", effectively creating a "script" that can be simulated over and over again.

SCOM 2007 can do it. Anyway the tool you will use, take care of not overloading the system through the monitoring.

Digging in not so used WMI can reveal WMI troubles. Our SCOM revealed problem because of too deep WMI query with not cached Data. We had to apply hotfix for keeping WMI working.

Referenced on another post on how to monitor your windows server What tool do you use to monitor your servers? There's a tool from codeplex named PAL, i usually define all the counters i need on a server and schedule them to start automaticly and run for 5 minutes every hour. The output is thrown into blg binary files that i later on crunch using PAL (M$ LogParser) and generate my reports. This task can be automated so the reports be sent by mail.

Hmm - all the above are valid options, and some are probably better than the perfom solution.

But for your Perfmon solution, you can kind of save and load a counter set.

Restart PerfMon (or right click and select Remove All Counters). Open the above saved html file in NotePad, and select it all and copy it to the clipboard.

Disclaimer: My $.02 as the Zenoss Community Manager.

Zenoss does everything you want: Cisco, HP switches and servers, Windows servers and applications via WMI. Uptime/availability, bandwidth usage and alert sending (plus you can re-use your existing Nagios and Cactii plugins). Plus it's free and open source and doesn't use any agents and has a very large and active community of users monitoring a very diverse set of hardware and services.

187
What tool do you use to monitor your servers?
3
What are the best system monitoring/capture and reporting tools for medium sized business

5
Real-time IIS monitoring
1
Establish a performance baseline for terminal server windows machines
107
How can a single disk in a hardware SATA RAID-10 array bring the entire array to a screeching halt?
6
Have issue with monitoring 32bit app pools running on 64bit IIS
1
How do I measure and compare disk performance of my Hyper-V Windows VM?
7
Connecting to Remote Server Using Performance Monitor Does Not Work
2
Automating a collection of Perfmon counters
1
Server high memory and cpu - no leads