After upgrading to 2008 R2 Enterprise and installing more RAM, Windows can only see 4.00 GB

I've upgraded from Windows Server 2008 R2 Standard to Enterprise in order to make use of more RAM. The server previously had 32GB of RAM.

The upgrade from Standard to Enterprise, using DISM, seemed to go OK, so I powered down and installed the RAM. This a Dell Poweredge T710, I was taking it from 32GB to 72GB.

The BIOS recognised the RAM, although I needed to change from "Advanced ECC" to "Optimizer" mode for it to use all of it.

After rebooting, windows can see the RAM but in the system panel will display:

In the resource monitor, the remainder of the RAM is showing as reserved for hardware. I've tried various RAM configurations, including reverting it to the same chips and same configuration as before the upgrade, but always just 4.00 GB is showing up as usable. Following some threads on these forums I've gone into msconfig and set the maximum memory "by hand" but that doesn't fix the problem. BIOS doesn't seem to have anything that looks like memory remapping which is another suggestion that has come up.

How do I make this RAM available to Windows? It was available before the upgrade, because I could use the full 32GB RAM the server had to start with.

A screenshot (this is after reverting to the original RAM configuration) 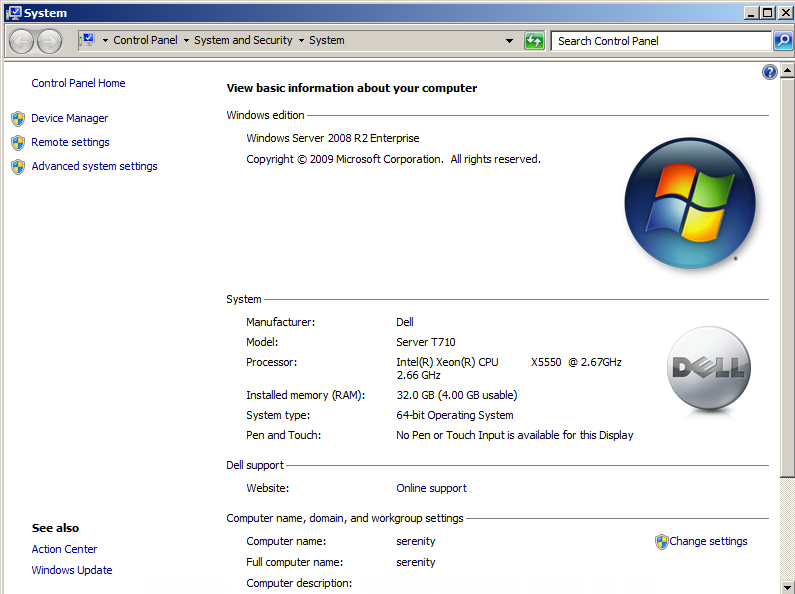 I don't know if it's related, but my remote desktop configuration has also disappeared: 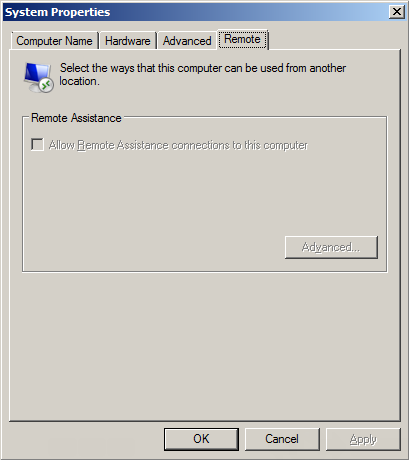 (the bottom half of this dialog should allow me to configure Remote Desktop, it was working before the upgrade but now it isn't).

I have found a temporary answer - but it gives me another problem. Here's what I just posted on technet, where I also asked this question:

OK, I have temporarily got round the problem - it's not the BIOS - but now I don't know how to fix it permanently.

The clue came from this thread, where C Clarke appears to have done the same things as me:

"We had "updated" these from Standard to Enterprise, using the DSIM utility and the generic KMS key available off of MS web site. We had then changed the license key, from the GUI to be a valid license key for Enterprise. After a reboot RDP was not working."

"Just now I reverted to the "generic" KMS key and everything is working..."

later on he says:

"Then I used another valid MAK key, and everything still worked. If I use the other one (which is now working on a completely rebuilt server), it doesn't - also says 4GB usable out of 48GB RAM....?.."

...exactly the same symptoms as me; only 4GB usable RAM, no RDP.

I've just changed the product key on our server to use the generic KMS key for Enterprise - and all is good. I have RDP, and I have 72GB RAM.

But - I'm now using a key for which I don't have a license. This server is purely for development and testing (right now we need to have 20 VMs up at the same time, hence the need for extra RAM beyond 32GB and therefore Enterprise).

So, my question now becomes - how do I apply the MSDN Enterprise key and still retain more than 4GB usable RAM, RDP, and perhaps other features that I didn't spot were missing?

Now I know what the real question is, I have asked it separately:

While I don't have a "here is your problem" answer, I do have a method of helping identify what may be the problem. Based off of what I'm reading here and what I can see on my own servers, Device Manager should be able to help you identify what's going on.

If you open Device Manager, change the view to "Resources by Connection" (not "Devices by connection"). The "Memory" node in there will give you a list of memory reservations by your hardware. Hopefully, the thing that's eating all but 4GB of your RAM will be listed in there. You'll have to convert the hex to RAM sizes, but it can be done.

Once you've identified the device, you're further along than you started.

I've answered this question in the linked question (the REAL question and root of the problem is about switching between OEM, KMS, and MSDN keys).

Here's how I got my server back:

Start with the server upgraded to Enterprise using the KMS Key. This for me is unlicensed.

Use the MSDN installation media (i.e., the burned ISO) and run the installer from within the current Windows instance. You can then reinstall Windows - make sure you pick the correct option so that you preserve existing files, application, settings etc.

After half an hour or so Windows will have finished installing. When you activate Windows, use the MSDN key, and all will work.

So, it looks like you can't switch keys between OEM/KMS/MSDN - you need to install Windows (or reinstall/update) from the appropriate installation media for the key to "take" correctly.

Regarding the missing remote desktop configuration, it may be possible that you need to install the Remote Administration feature.

The memory issue could be a problem with the BIOS properly reporting the memory configuration to Windows. You might want to update the BIOS if you haven't already. If you have time on your hands (and who does?) you might want to go back to the original amount of RAM and add a little at a time until the problem manifests.

IIRC Dell servers have an "installation mode" setting in the BIOS that limits the server to 4Gb available memory. You may want to see if someone has toggled that and if so, switch it off.

You may want to view the MSCONFIG | Boot tab | Advanced Options to verify the Maximum Memory setting.

I believe I have found resolution to this issue. I just ran into this exact problem and this put me on the right path. Below are the steps I performed to solve the issue and keep the proper licensing.

please follow below steps and reactivate your windows, it should resolve the issue-

Not the answer you're looking for? Browse other questions tagged windows-server-2008 memory licensing 64-bit or ask your own question.