Is it possible to ban an IP address after X number of unsuccessful login attempts to a Windows Server? Not to a particular account, which I know how to do, but to the whole machine.

We get hit pretty hard by brute force attacks trying to guess usernames, so this would really help get some load off the server.

You can do this with powershell and task manager. It's probably not perfect solution, but it works quite well and i have about 100 blocked IP addresses in two months. I wrote script, that select from EventLog specified events ("audit failure"). If there are many failed logins from any IP address, then it's added to firewall rule (created manually) named "BlockAttackers" which blocks any traffic to specified ip addresses.

Create task in scheduler and set trigger to event 4625 (windows login including terminal services). But you can set trigger to run e.g. twice per hour to avoid unnecessary loading the server. 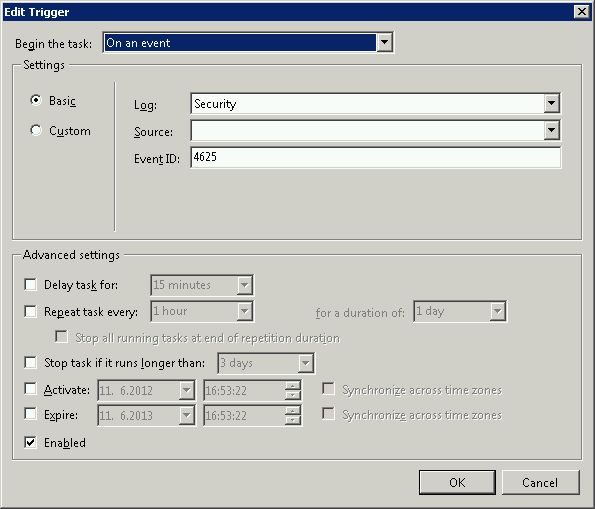 and after trigger run powershell script. You must also set higher privileges to run this script, otherwise it will fail with security exception. 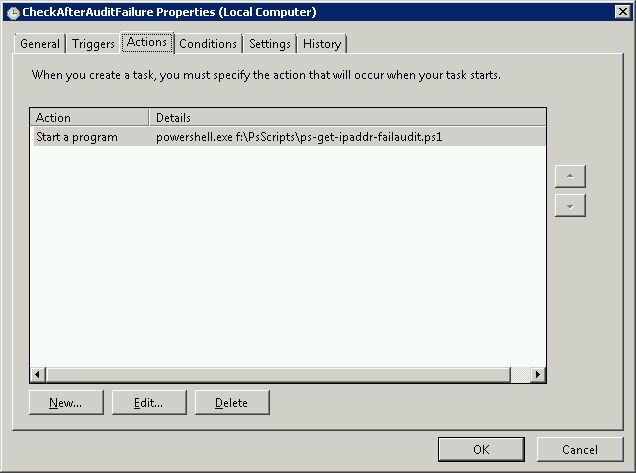 You can also bind this script to other security events.

I know this question is old but it was actually the first forum post I stumbled across when I started trying to do this exact same thing a couple weeks ago. I've managed to come up with a working script that will parse the event logs 24 hours back for only bad login event log entries, grab the ones that have more than 10 bad logins, and then put them into an ipsec filter list using the netsh command. Then I wrote a batch file with this line powershell .\*scriptname.ps1* and created a scheduled task to run the batch file every 24 hours (for some reason it wouldn't execute directly).

I know that this script is probably inefficient but when I started working on this I had absolutely no experience in powershell, so my ability to optimize scripts leaves alot to be desired. However, despite this fact I thought I would share this with anyone who could use it.

I thank Remunda for giving me the initial idea, that poster is the one that turned me on to the idea of using powershell to search the event logs.

This script builds on remunda's answer and goes a little further https://serverfault.com/a/397637/155102 It accounts for the "BlockAttackers" rule not have any IPs entered yet (which returns a "*" as a string). It also writes a comment to a log file to let you know when the IP was added to the rule.

A good tip is to create the "BlockAttackers" rule that blocks the IP addresses BUT make it disabled at first. Then, run this script once manually so it can populate the "RemoteAddresses" field with actual IP addresses that should be blocked. Take a look at those IP addresses to make sure nothing critical has been added and then enable the firewall rule. Add this rule to your firewall as remunda described.

The git for this script

I can't take credit for this answer, but https://serverfault.com/users/7200/evan-anderson has mentioned his project http://opensource.wellbury.com/projects/windows_sshd_block/newest-release/

It's generally not a good idea to let somebody else control your firewall rules. That's basically what you're asking for here.

This is an old thread. I was using the script provided by kevinmicke in 2014-2015. Then it just stopped working. So I had to edit it a bit to adopt to Windows Network Security authentication that does not leave IP addresses in the security log. Also, since I don't have regular FTP running I removed that part as it was causing errors because there was no log folder. The main change is in the source of RDP events.

The above script will work on Windows 2012. If you are still using Remote Desktop with network access level authentication on Windows 2008 then you might need to do the following trick. Windows 2008 does not have IP addresses in the security log and does not seem to have them in the Microsoft-Windows-RemoteDesktopServices-RdpCoreTS log either. So I had to actually use 2 logs - match events from the security log to successful access attempts to port 3389 in the firewall log. This is a guess work, but it seems to be detecting password attacks. Here is the part that collects violating IPs:

NOTE: Don't forget to enable firewall logs. NOTE 2: I am not a powershell expert so it would be nice if some gurus can correct/improve my code.

Using remunda's great script as a starting point, I added the one major thing that was missing: blocking IP addresses from failed FTP logins. Windows Server doesn't log the IP address to the Security log when someone fails to login via FTP, but instead sets the "Source Network Address" to a dash. FTP is a very common attack vector for brute force attacks, so I added to his script the ability to scan the current day's FTP logs for multiple login failures and block those IP addresses as well.

Update 2014/02/07: When I made some tweaks to this to process all my old FTP logs, I realized when they had immense numbers of attempts (50,000+), the arrays it created would be huge and make the processing incredibly slow. I've since rewritten it to make it much more efficient when processing FTP logs.

I also found out that there's an arbitrary hard limit of 1000 for how many IPs can be in one Windows Firewall rule. Because of that limit, I needed it to automatically create a new rule when the latest one fills up. It now does that, and also creates the initial firewall rule (if you don't create your own) so that the only setup to do is adding it to the Scheduler to run when there's an event 4625.

Here's the code, which has been tested on both Windows Server 2008 R2 and Windows 7:

Basically it's a "VBScript program that acts as a WMI event sink to receive events logged by Windows in response to invalid Terminal Services logons."

Seems to work perfectly, and the script is straightforward if you need to mod it. You can either let it log attempts and then ban based on your number of allowed attempts, and/or you can hard-code login names you don't want to give access to.

I got caught out by accidentally adding the same name twice and the service just goes into an endless loop restarting every 1500ms, but very easy to fix/mod if you're ok with vbs.

My current settings are just one retry and you're banned for 2 days, with logins like 'admin' 'Admin' 'Administrator' 'guest' etc automatically banned. Should be straightforward to change to ip?

Kinda addictive to go in and see which critters have been banned overnight...

If there is a webserver that is being attacked you can install the dynamic IP restrictions extension. If this is for standard authentication to the server then you should be able to implement domain and server isolation which would limit the scope of the attacks to domain joined computers, and could be set to only allow attempts from the systems you need to have access to the server. In windows the prevention of brute force attacks is to set the account lockout policy to a setting like 10 mins and a bad password policy to 3 attempts - this means that the account being attacked would lock for 10 mins after 3 attempts. IP connections are not lockable by default in windows. ( As an aside I am also curious as to how many logon attempts it is taking per second to impact the system)

If what you want is an out of the box solution (Install & done) you can find a free tool here, and probably should go on reading this:

New in 1.2 (more info in the documentation):

The script of remuda, edited by kevinmicke (Feb 7 at 21:59) didn't check the FTP's control channel, which has an own folder on my system (Windows Server 2008 R2). Also 530 11001-events haven't been recognized, which seem to appear when the hacker only tries to access to the control channel. So I appended some lines in the script to check a second FTP-log-folder:

The name of the FTP's log-folder FTPSVC* on line 54 has to be completed of cause. In line 115 and 116 have to be entered your server's IP (IPv4 and IPv6), otherwise the own servers IP might be added to the firewall-rule a hundred times. The variable $int_block_limit I'm setting to 1 at my server, so the script is blocking a hackers attack causing a 4625-event within two seconds. I'm still thinking about to run the script additionally to occurring 4625-events in a time period of a few minutes. Of cause, it would also be possible, to separate the scripts and let one script check the 4625-events triggered by the 4625-event and another one the FTP's log-folders checking periodically every 5 or 10 minutes, even with separate firewall-rule and log-file.

I have added mine for SQL

Then you will have to add the array into ips_all

Not the answer you're looking for? Browse other questions tagged windows brute-force-attacks or ask your own question.

20
Cygwin SSHd Autoblock Failed Logins
23
How to stop brute force attacks on Terminal Server (Win2008R2)?
15
Is it worth the effort to block failed login attempts
3
Ban IP Address on unsuccessful login on Server 2003
1
How can I list the Source Network Address for failed FTP attempts in the Security Windows Log on Windows Server 2008 R2?
0
Ban IP address based on X number of unsuccessful sql server login attempts?
1
How to secure a Windows SBS Server against fraudulant login attempts?