Each switch is setup to do port mirroring to support our VoIP recording system. SwitchA does port mirroring on specific ports if we need to record a user. SwitchB mirrors one port to monitor our work at home users (Internet comes in from managed router, to switch, back out to our firewall.) These two port mirroring setups feed into one vmware vSphere 4.1 server, it has four total physical cards. The other two NICs feed into an unmanaged switch for connecting to the rest of the network.

Once into the vSphere server all network ports go into a vSwitch, and then one of the servers (Windows 2008 R2) sniffs them out and does its thing.

Everything is working fine and dandy from SwitchB. But on SwitchA we only receive one side of the VoIP packets (going out to the phone, nothing coming in from the phone).

Troubleshooting steps I have taken so far:

Because everything feeds into one vSwitch / vNetwork and both sides of the conversation arrive just fine from SwitchB I believe everything is configured correctly on the vSphere server/guest.

What could be causing one way packets to arrive on my guest machine from only one interface, but not the other? Could a bad cable be causing the problems from SwitchB?

Can a vSwitch have two vlanIDs? Could I set the vSwitch to have both 1 and 50 associated with it? It seems that because there is a drop down for either None (0) or All (4095) those are my options.

To answer my own question it was a real simple change to my NIC driver on the guest machine. 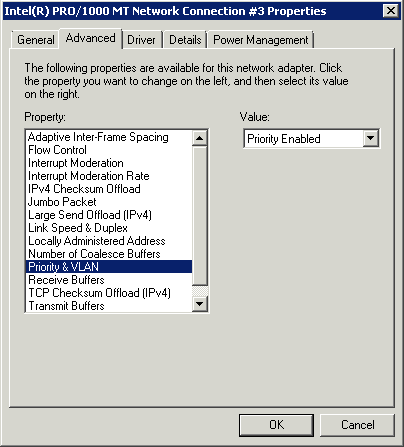 Not the answer you're looking for? Browse other questions tagged vmware-vsphere switch voip port-mirroring or ask your own question.

0
No default VM network adapter after migrating to vNetwork Distributed Switch (VMware vSphere 4.1)
5
How to capture Wireshark packets when using a switched network in Windows
116
Can you mount a network switch upside down?
1
VLAN configuration
2
ESXI 5.1 - Unable to trunk to cisco switch
4
VMware vSwitch and double tagging (QinQ)
0
Voice VLAN Configuration on Cisco SG300
3
Can PoE kill unmanaged switches?
0
VMWare & VLANs - why am I able to access one VM but not another?