Nginx - What is does the nodelay option do when limiting requests?

With the nginx HttpLimitReq module requests can be limited by IP. However, I'm not understanding what the "nodelay" option does.

If the excess requests within the limit burst delay are not necessary, you should use the nodelay

The documentation here has an explanation that sounds like what you want to know:

The directive specifies the zone (zone) and the maximum possible bursts of requests (burst). If the rate exceeds the demands outlined in the zone, the request is delayed, so that queries are processed at a given speed

From what I understand, requests over the burst will be delayed (take more time and wait until they can be served), with the nodelay options the delay is not used and excess requests are denied with a 503 error.

If you’re like me, you’re probably wondering what the heck burst really means. Here is the trick: replace the word ‘burst’ with ‘bucket’, and assume that every user is given a bucket with 5 tokens. Every time that they exceed the rate of 1 request per second, they have to pay a token. Once they’ve spent all of their tokens, they are given an HTTP 503 error message, which has essentially become the standard for ‘back off, man!’.

TL;DR: The nodelay option is useful if you want to impose a rate limit without constraining the allowed spacing between requests.

I had a hard time digesting the other answers, and then I discovered new documentation from Nginx with examples that answers this: https://www.nginx.com/blog/rate-limiting-nginx/

Here's the pertinent part. Given:

The burst parameter defines how many requests a client can make in excess of the rate specified by the zone (with our sample mylimit zone, the rate limit is 10 requests per second, or 1 every 100 milliseconds). A request that arrives sooner than 100 milliseconds after the previous one is put in a queue, and here we are setting the queue size to 20.

That means if 21 requests arrive from a given IP address simultaneously, NGINX forwards the first one to the upstream server group immediately and puts the remaining 20 in the queue. It then forwards a queued request every 100 milliseconds, and returns 503 to the client only if an incoming request makes the number of queued requests go over 20.

If you add nodelay:

With the nodelay parameter, NGINX still allocates slots in the queue according to the burst parameter and imposes the configured rate limit, but not by spacing out the forwarding of queued requests. Instead, when a request arrives “too soon”, NGINX forwards it immediately as long as there is a slot available for it in the queue. It marks that slot as “taken” and does not free it for use by another request until the appropriate time has passed (in our example, after 100 milliseconds).

The way I see it is as follows:

The setting defines whether requests will be delayed so that they conform to the desired rate or whether they will be simply rejected...somewhat whether the rate limiting is managed by the server or responsibility is passed to the client.

Requests will be handled as quickly as possible; any requests sent over the specified limit will be rejected with the code set as limit_req_status

Requests will be handled at a rate that conforms with the specified limit. So for example if a rate is set of 10 req/s then each request will be handled in >= .1 (1/rate) seconds, thereby not allowing the rate to be exceeded, but allowing the requests to get backed up. If enough requests back up to overflow the bucket (which would also be prevented by a concurrent connection limit), then they are rejected with the code set as limit_req_status.

The gory details are here: https://github.com/nginx/nginx/blob/master/src/http/modules/ngx_http_limit_req_module.c#L263 where that logic kicks in when the limit has not yet been passed and now the delay is optionally going to be applied to the request. The application of nodelay in particular from the directive comes into play here: https://github.com/nginx/nginx/blob/master/src/http/modules/ngx_http_limit_req_module.c#L495 causing the value of delay above to be 0 triggering that handler to immediately return NGX_DECLINED which passes the request to the next handler (rather than NGX_AGAIN which will effectively requeue it to be processed again).

I didn't understand that at the first time when I was reading the introduction from https://www.nginx.com/blog/rate-limiting-nginx/.

Now I am sure I understand and my answer is so far the best. :) 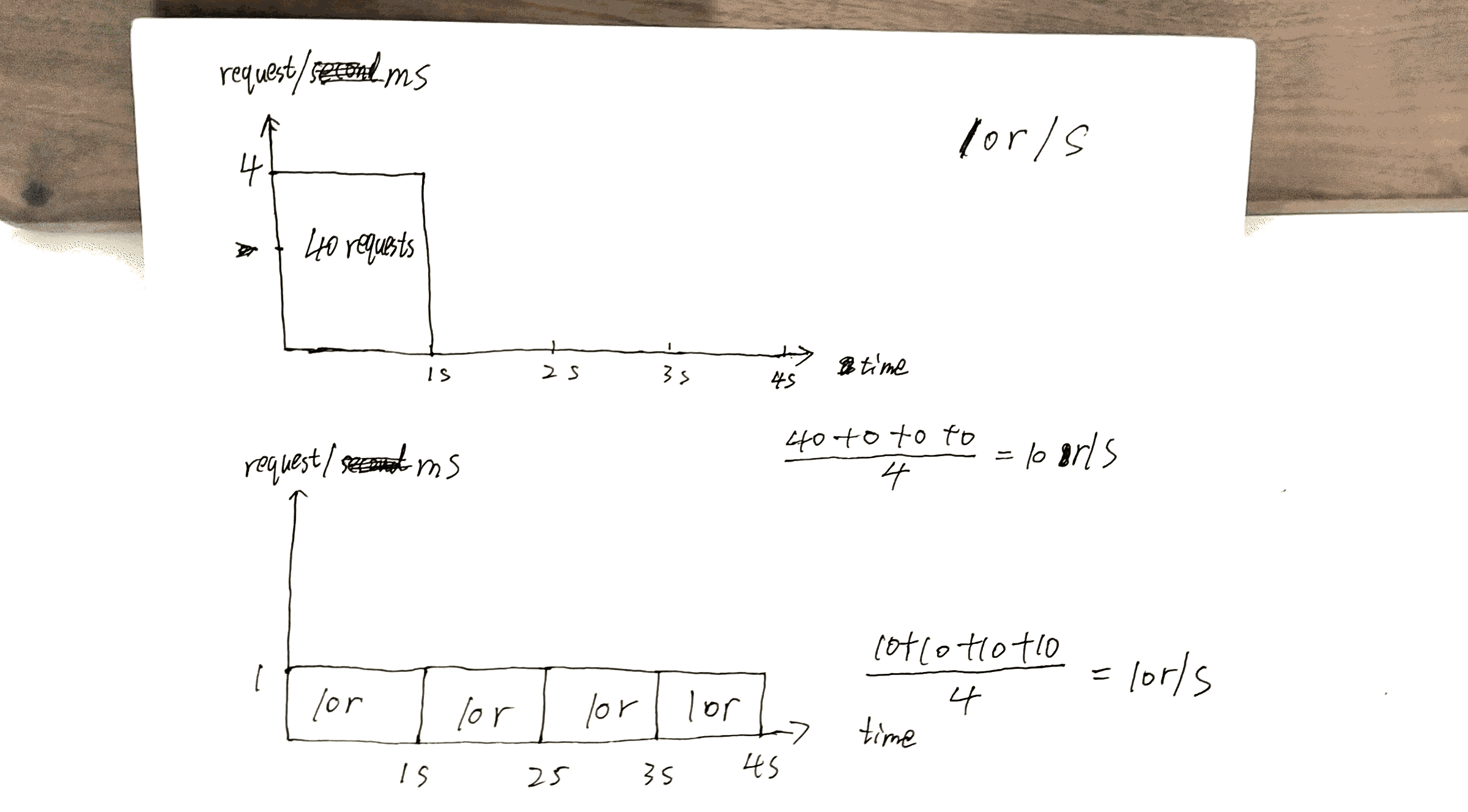 As the https://www.nginx.com/blog/rate-limiting-nginx/ documented (I strongly recommend reading the article first(except the Two-Stage Rate Limiting section)), this behaviour fixes one problem. Which one?:

In our example, the 20th packet in the queue waits 2 seconds to be forwarded, at which point a response to it might no longer be useful to the client.

This can make the best use of the server's capability: sends back responses as quick as possible while still keeping the x r/s constraint to a given client/IP.

But there's also cost here. The cost will be:

If you have many clients queuing on the server let's say client A, B and C.

Without nodelay, the requests are served in an order similar to ABCABCABC.
With nodelay, the order is more likely to be AAABBBCCC.

I would like to sum up the article https://www.nginx.com/blog/rate-limiting-nginx/ here.

Above all, the most important configuration is x r/s.

1. vs 2., the cost is that on the client side, the queued requests take up the chances of later reuqests which will have had the chance of getting served.

For example, 10r/s burst=20 vs 10r/s, the 11th request is supposed to be rejected immediately under the latter condition, but now it is queued and will be served. The 11th request takes up the 21th request's chance.

P.S. The Two-Stage Rate Limiting section of the article is very confusing. I don't understand but that doesn't seem to matter.

With this configuration in place, a client that makes a continuous stream of requests at 8 r/s experiences the following behavior.

Not the answer you're looking for? Browse other questions tagged nginx rate-limiting or ask your own question.

6
How soon does nginx's token bucket replenish when limiting at requests per minute?
262
Why do I need Nginx and something like Gunicorn?
7
nginx proxy_cache: limit parallel requests to a backend
25
nginx rate limiting with X-Forwarded-For header
16
What's the meaning of defining “burst” with “nodelay” option?
5
Nginx limit requests globally
1
Nginx rate limiting - only slowdown if ceiling hit