I managed to setup a remote tunnel in UBUNTU to my home pc by issuing the autossh command [in the work pc]:

So far with the old router everything was working fine I just forwarded port 22 to my laptop and everything went smooth.

Now I changed flat and I have a router that is not completely under my control [I have just a passwd for the wireless but no admin rights access and no physical access to it]. As I guess that I cannot change the config on the router is there anything that I can do ? work pc is behind a firewall.

would be there a way of using 3 pc while the middle one will just forward the data back and forth from home to work ?

Is there anything that suitable for ubuntu ? HAMACHI would do or do I require another solution ?

Since you can't configure either of the firewalls, any solution would require some machine in the middle.

If you have a VPS somewhere you could set up VPN. 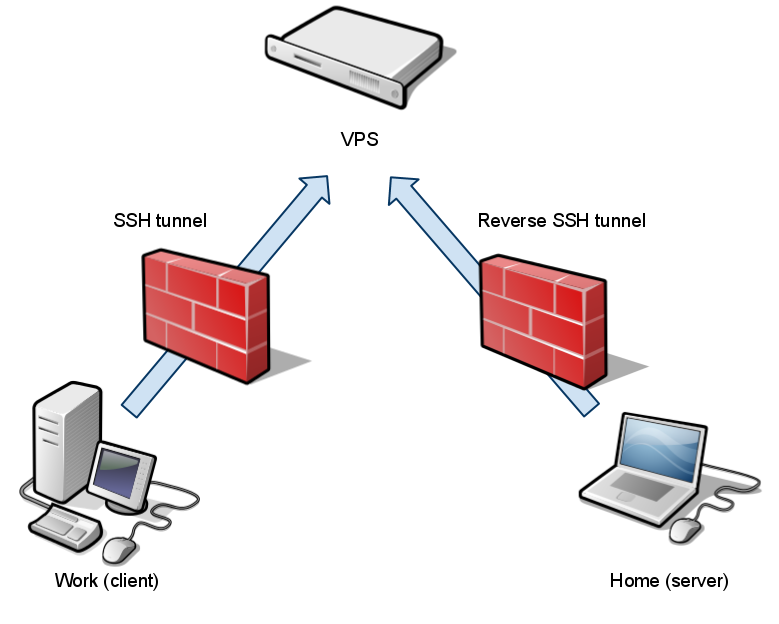 If you don't have a VPS or something similar, you will indeed have to rely on a service like Hamachi.

There is another option I have been using lately, Teredo tunneling.
Teredo gives you an IPv6 address and makes your machine directly addressable over the internet (to anyone else using IPv6).
This can be both useful and dangerous. Any NAT and firewall for the IPv4 interface in place will be circumvented.

The Teredo implementation for Linux is called Miredo. Install it on Ubuntu using sudo apt-get install miredo.
Make sure to configure your ip6tables, and run sudo update-rc.d -f remove miredo so the connection isn't on by default.
You can then choose when to open it using sudo ifup miredo.
You will need to do this on both machines so they both have IPv6.

Not the answer you're looking for? Browse other questions tagged vpn ssh-tunnel hamachi or ask your own question.

1
My ISP has me on a static IP address, but I'm sharing my connection. What IP address should I provide for Remote login?
2
software VPN via Ubuntu & osX
0
Looking for a means to monitor a users network connection
1
Connecting to the workplace LAN that is behind NAT (with Hamachi? any better idea?)
2
Incorporating LogMeIn Hamachi into your own work network as dedicated VPN solution
3
SSH not working over VPN only