So the scenario is the following i have a router when a request goes directly to its public address X.X.X.X it port forward to a IIS server, nevertheless my IIS has as its gateway a iptable/squid server which i have allowed the IIS the privileges to pass by this services with a rule of forwarding all IIS and setting it as a fullAccessUser on Squid.

Even though it always promt 110 connection time out and i don't know why, because it should be able to go out. The scenario is something like this one: 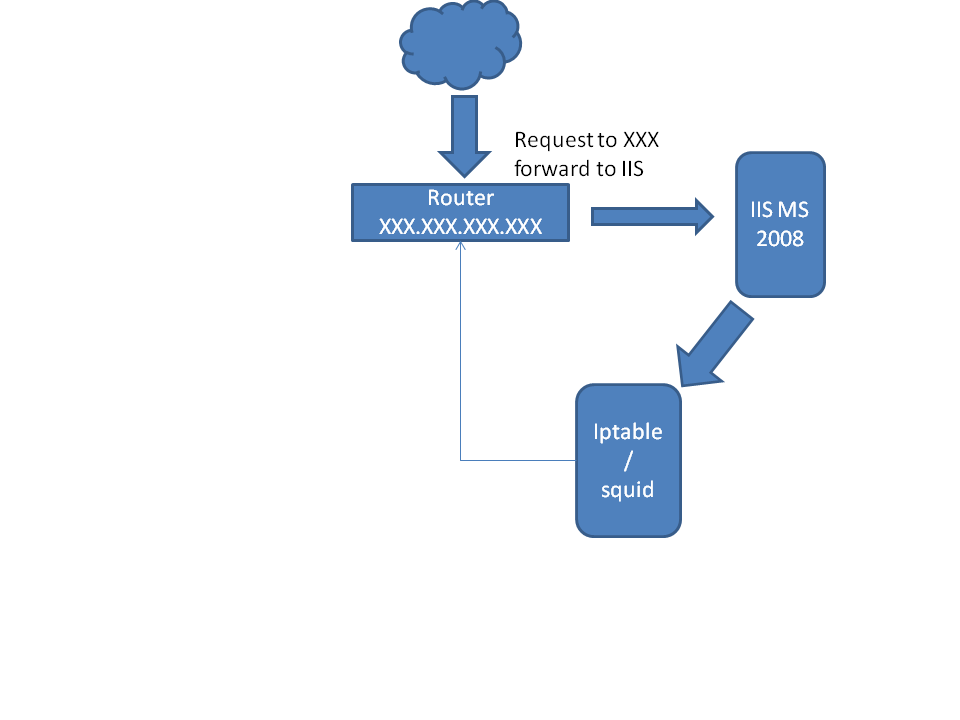 You are doing something called "asymmetrical routing", and it has potential pitfalls when used in conjunction with NAT and stateful firewalls. Specifically, I believe by trying to send the return traffic through the iptables/squid machine, it will be blocked every time. It is the equivalent of asking the squid server to join in a conversation 1/2 way through and know instantly what's going on.

The fix is simple: don't bypass the squid proxy for the inbound traffic. Configure your router to port-forward 80 to the squid server, and then setup squid to act as a reverse proxy for your IIS server. Then all traffic will be internet -> router -> squid -> IIS and then IIS -> squid -> router -> internet. Alternatively, you can port-foward to the squid server, and then port-forward again to the IIS server. I recommend against doing that though.

Not the answer you're looking for? Browse other questions tagged windows-server-2008 iptables squid port-forwarding or ask your own question.

0
Trouble with Port Forwarding and TWO physical webservers behind a router/firewall
1
Forward remote control port with iptable
0
Redirect 443 Traffic of a Particular Incoming IP Address?
1
Redirect web petitions to a proxy with authentication
4
Remote access to internal machine (ssh port-forwarding)
6
Port forwarding through OpenVPN
4
How to route between 2 networks with a server with 2 network cards?
5
How can I forward the HTTP and SSH port to my internal server using iptables?
0
How to tighten forward iptables forward chain for DNAT+SNAT traffic