Does it make any sense to run a virtual machine with a "master" guest,
and in that master guest run many other guests?

Has anyone tested this? Is it even possible?
Are there better ways to accomplish my goals? (Read on.)
(I googled for "guest in guest" and found nothing)

What I want to do: I'd like to set up and test various virtual networks, with database and application servers, and test different firewall, DNS server, database server configs, etc.

I could do this by running guests directly on my host computer, but then I might need to modify the network config on my host (e.g. configure dnsmasq?), depending on what network setup I'm about to test. I'd also need to start each guest individually. Whereas if all guests run inside a master guest, then I can config the network on that master guest, and I need only start and stop that master guest, and take snapshots of it, to implicitly start & stop & snapshot all guests running inside it.

(I would have many master guests, probably only one running at a time.)

I'm using Ubuntu 11.4 and KVM, with hardware virtualization support (AMD-V).
Do you think the guests-in-the-guest would benefit from virtualization?

Update: Performance info on Intel processors, from 2011: "There ist no support for nested virtualization with intel vmx in the current version of kvm in the Ubuntu repositories. With the newest patches for kvm it is possible, but there are still in development"

in order to test such services I think "normal" virtualization will do.

you can have a few different virtual networks, with different dhcp/dns/routing services.

What you want to do is possible, it's just not really practical from a performance point of view.

ESXi can virtualize itself. So you can run ESXi as a guest on ESXi (or ESX for that matter). 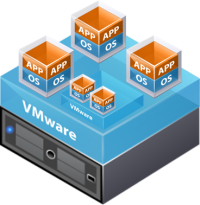 Howewer, where this is possibile, it's totally unsupported and also quite useless, unless for testing purposes. I personally did it with ESX to test a VMware cluster, which required at least two ESX hosts, a Virtual Center machine and some shared storage; I didn't have more than one server nor any "real" storage available at that point, so I used virtual ESX hosts with a shared virtual disk (just like I would have done to test a Microsoft cluster). It worked, and it was also not terribly bad at performance. But I can't think of any reason in the world to use this kind of setup in a production environment.

kvm within kvm will not work, though the inner guests can run on pure qemu, in emulation mode.

I'd leave the VMs on a single host, without overcomplicating things

KVM probably is not the best option for your purpose, you should try Virtualbox.

Have you checked out XenServer? The new beta version is called "XenServer boston" Read more about it here:

In the release notes, you will see the following:

Virtual Appliance support. Within XenCenter you can create multi-VM virtual appliances (vApps), with relationships between the VMs for use with the boot sequence during Site Recovery. vApps can be easily imported and exported using the Open Virtualization Format (OVF) standard

Using this feature combined with Virtual Lans, you will be able to accomplish what you want. I'm not positive, but I believe you can also create a snapshot of all the Vm's in the Virtual Appliance at once.

Whether it's possible or not is irrelevant. It just doesn't make sense. You gain absolutely nothing by nesting VMs, while losing a lot.

2
Recursive virtualization - Is it possible?
26
How to run VMWare ESX or ESXi in a virtual machine?