I've a network which is mainly Windows: Windows 2008 server (with DNS/DHCP as well as AD), and various mainly Windows machines (servers, XP, 7). I know trying to add few Linux boxes, and can't make them appear on the DNS server.

I'm using Ubuntu 11.04 (both client and server). The Ubuntu boxes are NOT part of the Domain though Samba or anything.

I've seen many conflicting answers on the Internet, including this site: is the registration done by the Linux box or by the DHCP server?

I've tried on the following:

Another side question: Why do I have both /etc/dhcp3 AND /etc/dhcp on my Linux box? Only the latter folder has dhclient.conf (despite common remarks on the web).

Also, is sudo dhclient -r really the equivalent of ipconfig /renew? As far as I can say it does nothing.

after you`ll configure you linux pc

Then go to Advanced Tab: DNS dynamic updates registration credentials - Credentials, and set credentials from which name DHCP will be updating DNS records. (without this it won`t work) Alexey

There are a couple of ways this can happen; there are pros and cons to each approach.

First is the "simple" way to do it (which just means fewer moving parts); having the ubuntu boxes send DNS update commands to the DNS server. nsupdate is the means for this, it's in the dnsutils package. The major caveat here is that unauthenticated updates will need to be turned on in your DNS zones, which can pose a pretty nasty security risk - names that applications/systems like to use for service discovery ("wpad", "teredo", "puppet") are ripe for the hijacking.

Second option is to configure the DHCP service to inject the records for you. Seems like this is what you were trying to do. Some things to check to make that work the way you're expecting:

Oh, and assuming your DNS is AD-integrated, don't combine both methods - you'll end up with AD object permissions issues when the DHCP server tries to update something that was already inserted by the host.

Please check this answer, this will provide a method to add your host to any DNS server. However, I must point out that usually DHCP server register the assigned clients automatically, unless (a) your hostname is incorrect or missing or (b) your DHCP server is not instructed to do so.

Your scope on the DHCP server must have updates enabled. 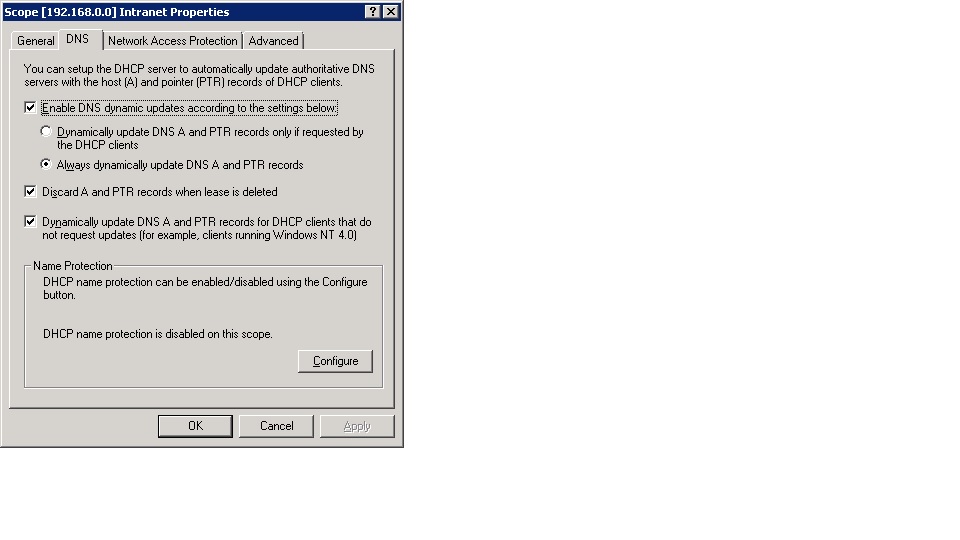 ".mydomain.com" if in DNS A, you have a forward lookup zones called "mydomain.com" (look in DNS Manager on your DNS server)

reboot your computer, you can see in your DHCP that the computer appears with the good name, and after DNS A and PTR update nicely

The easiest way is to install samba server on your linux box. By doing this you will be able to ping your linux box using the hostname from any OS.

Not the answer you're looking for? Browse other questions tagged linux windows domain-name-system dhcp dhclient or ask your own question.