An industrial site needs to link 3 seperate areas in a building in such a way that all the switches are on the same network and sharing the same wan link. The wan link will only be coming in from one of the sites and attached to the switch.

The distance between each site will likely be greater than 300 meters.

The fibre will connect to switches at each site via SFP+ transceivers.

The switches will have SPF+ 10Gbe ports.

The so called 2x fibre line to each site using ring topology is apparently for high availability.

Similarly, each site will have 2 switches, stacked.

I worry that the client may not know what he is doing. Please comment.

Sounds like a good start to me if your client implements this correctly. When you say ring topology does this mean that say site1 has one fibre pair to site2 and one to site3? I would use layer3 routing between the buildings to get fast failover but spanning-tree could solve this.

I wouldn't call this 'wrong', but it depends on how the WAN link is coming in. Where is the WAN router in this scenario? Also, are you using 2 pairs of fiber, or 1 pair of fiber (2 strands)? If it's 2 pairs and everything is connected A=B=C, that's really not very redundant - only protects against breaks in fiber.

If they're making a triangle, that is semi-redundant. If it is a layer-2 connection (that is everything is the same Ethernet subnet, and the switches at each site are not operating at layer 3), then the spanning tree protocol will block one of the links during normal operation. So this is just okay but not ideal: 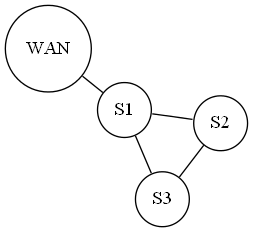 With the above, you still have a single point of failure at S1 though, and potentially in the WAN router itself.

This setup is marginally better, with all of the S's having two paths to the WAN router. The SPOF is at the WAN router only, even if the WAN router and S1 switches are in the same room (of course keep as much separate as possible: power, other switches, etc.) 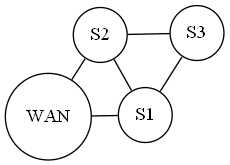 Obviously it would be better to have two WAN links and WAN routers, each connected to a different site. But that may not be practical for budgetary reasons. That would look something like this, and you would really need to do this with each S* having a layer-3 device or resort to VRRP to make switchover from WAN1 to WAN2 automatic: 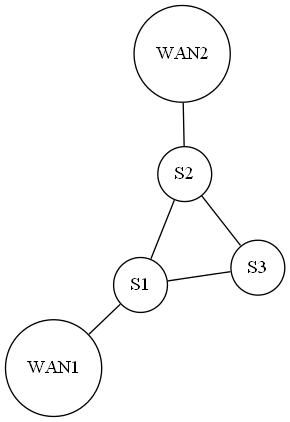 Finally, note none of these diagrams address redundancy within each site; if they want "redundant" you need at least two switches at each site depending on scale, and each server or other networked device needs two uplinks, one each to different switches.

Some concerns off the top of my head

Not the answer you're looking for? Browse other questions tagged high-availability fiber 10gbethernet sfp network-topology or ask your own question.

0
Adding 10GbE to a ring of 3com 4200 switches
0
Basic questions about network topologies
15
10GbE sfp+ cross over cable required? Is there such a thing?
0
Cisco SFP for single-strand single mode connection over 10km
0
How to connect 2 parts of a facility using fiber optic cable?
4
Do 10GbE SFP transceivers need to match?
2
difference between expensive and off-brand SFP+ trancievers
1
VLAN - Network Redundancy With Same 2nd Switch?