On a network interface, speeds are given in term of data over time, in particular, they are bits per second. However, in the uber-fast world of computing -- a second is kind of a really long time.

So for example, given a linear falloff. A 1 GBit per second interface would do 500MBit per half second, 250Mbit per quarter second etc.

I imagine at certain units of time, this is no longer linear. Perhaps this is set by ethernet frequencies, system clock speeds, interrupt timers etc. I am sure this varies depending on the system -- but does anyone have more information or whitepapers on this?

One of the main reasons I am curious is to understand output drops on interfaces. Even if the speed per second is much lower than the interface can handle -- perhaps there are spikes that cause drops for only small numbers of milliseconds. Perhaps various coalescing would hide this effect -- or perhaps increase it on the receiving interface? Do queues make a difference here?

Example:
So given if this is linear down to the MS we would have 1Mbit/MS, and if Wireshark isn't distorting what I see, should I see drops when I have a spike beyond 1Mbit? 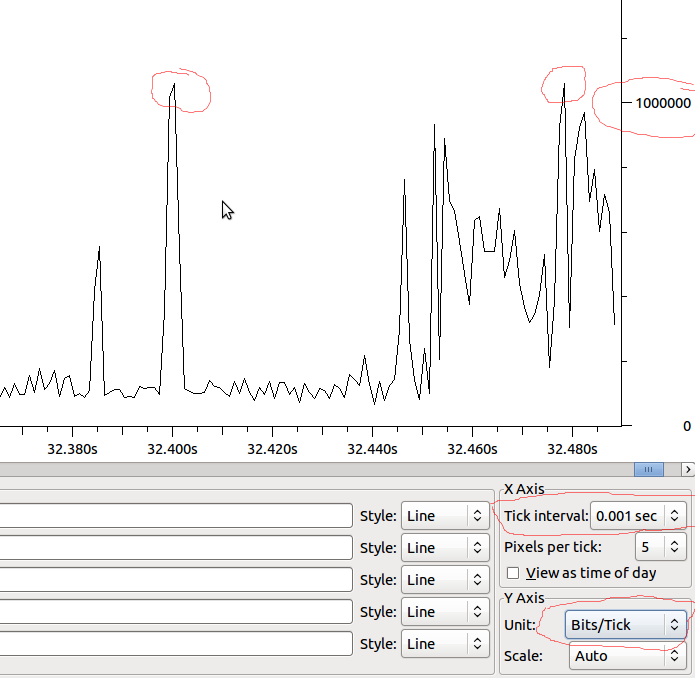 Speed is not that essential as many think. I had a server that had many drops (ingoing and outgoing) - but every tool only showed low bandwidth utilization (on a gigabit link, less than 2% average).

Nevertheless the statistic counters showed dropped tx and rx on the server. An analysis of the ip-packets showed that the server is being flooded by thousands of tiny ip sessions containing just a few bytes.

So the real problem - which you might see in your case, too - migth be that your hardware and/or IP-packet-stack is not able to serve enough packets per second.

What operating system are you talking about? If it is Linux I can give you further details.

Strange that Cisco does not know their own data sheets. :-/

Look at Section "Forwarding Rate: 64-Byte Packet Cisco Catalyst 2960-S" here. From this I would say the 2960-S is the bigger brother of the 2960 and should do a lot of PPS. Where do you experience that problem? Is this a trunk/uplink?

Since you talk about layer 2 forget IP - we are at ethernet packet level. But the problem could be the same.

Where/how did you run that wireshark?

Since the raw line speed is 1 Mbps/mS as you said, the graph showing spikes slightly exceeding that must be slightly distorted. Packets that are lost are not there, and so are not part of the graph.

Not the answer you're looking for? Browse other questions tagged networking nic or ask your own question.