I have a Parallels VPS with 1GB of RAM. Okay, hoster says it has 1GB but I can't check it as "free" and other similar commands return 13Gb which I guess is a size of physical memory.

When I execute top command I see the following output: 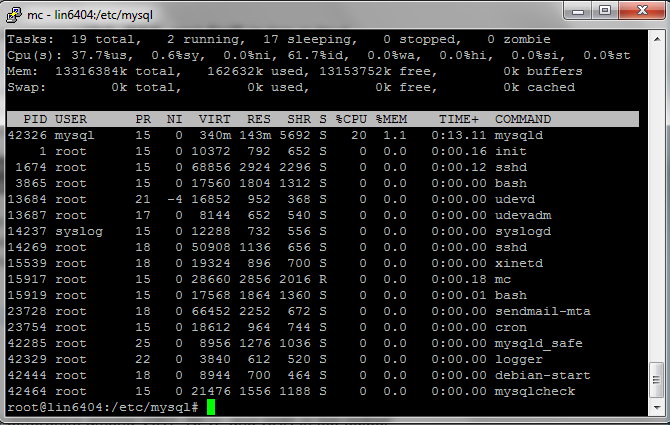 As you see mysql is the one process which uses significant size of RAM (143M). And the total size of used RAM is about 160M. The problem is I can't use more memory: if I extend some memore settings (for example, for mysql) I get "not enough memory", "can't allocate memory", etc.

I have two guesses:

Any other ideas how I can use more memory for mysql (I wanted to use about 80% of 1Gb)?

You have a Virtuozzo (or OpenVZ) VPS -- for which the normal rules of memory allocation don't apply. Assuming your hosting provider isn't lying to you, you "have" 1GB of RAM, insofar as the OpenVZ "hypervisor" will allow you to allocate 1GB of memory, or (more likely, based on your description of events) 1GB of virtual memory.

Just because you don't see any swap in top, it doesn't mean that all your data is in physical memory -- the rules are different (very, very different) for OpenVZ.

If you want to use more memory for MySQL, then you'll have to reduce the amount of memory that other things in your VM are using. Your top output doesn't list any obvious contenders, but if you sort it by memory usage, you'll get a much better idea of what's superfluous (and will give you the best bang for the buck).

As an aside, I'd recommend getting away from your current hosting provider -- while OpenVZ has it's place, that place isn't in the VPS hosting market. You probably picked them because they were a cheap provider, but you're learning why they're cheap -- OpenVZ is a very restricted platform, with it's own rather peculiar set of quirks. You're much better off with a provider of "real" VPSes (someone using Xen, KVM, VMWare, etc).

In addition to what has already been said, you might want to check /proc/user_beancounters, which holds information about the resource consumptions of your VPS.

I also found out there is a way to reduce virtual memory size by limiting default stack size. I would recommend this article and this forum post.

Not the answer you're looking for? Browse other questions tagged linux vps memory or ask your own question.

4
innodb memory usage mysql
11
Linux: memory is free but swap is used. Why?
0
Understanding Java's memory usage (JIRA/Tomcat)
14
Ubuntu Linux: Process swap memory and memory usage
3
Unusually high memory usage on a CentOS VPS with 512 guaranteed RAM
2
tar uses too much memory for its buffer - workaround?
7
MySQL memory usage is too high
4
Out of memory at 18% usage : where the ram goes?