Is it possible to configure pfSense in such a way that it acts as a bridge between two Ethernet interfaces, and has captive portal functionality? I want to use the captive portal package, but don't want any additional routing, DHCP, firewall, or anything else. We have other devices on our network to handle the other functionality.

Here is a boiled down version of the layout I want to achieve: 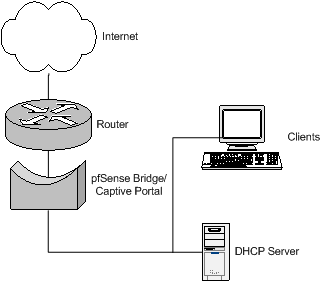 I have read through many pfSense forum posts that suggest this isn't possible, a couple that suggest it is. I have the bridge working, and have tried installing the captive portal on the bridge interface, but it doesn't do anything. I have enabled bridge filtering in the advanced options, but that seemed to have no effect.

How can I get this to work, if it possible?

As per openbsd doc (At some point anyway, pfsense was based on openbsd, as I recall - the pf packet filter is from Openbsd project) a bridge interface cannot have an IP, therefore it cannot be the captive portal:

That said, perhaps you can try adding a third interface that does have an IP, and see if you can use PF rules to redirect traffic that crosses the bridge intended to someipaddr:80 to captive.portal.host:80 which is listening on that third leg of the pfsense system.

A bridge interface can have an IP. But there are a number of complications in trying to do what you're looking to accomplish, like getting an IP from DHCP unless it's running on the firewall itself, accessing DNS unless it's running on the firewall, and potentially other complications. I wouldn't recommend running captive portal like that, use either a routed or NATed subnet behind the portal.

Not the answer you're looking for? Browse other questions tagged pfsense captive-portal or ask your own question.

1
“Content Injection” using my Squid Proxy (pfSense). Is this possible?
0
Web filtering/Captive portal solution
1
How does the captive portal redirect work behind the scenes
0
pfSense Mutli-WAN IP on single interface not achieved so far
6
DNSMASQ config for captive portal
0
Setting up pfSense to bridge LAN NICs and connect WAN
1
can pfSense captive portal grant internet access to IP which is assigned by Windows DHCP server only?