How to remember RAID levels? [duplicate]

Ask Question
Asked 10 years, 8 months ago
Active 6 years, 11 months ago
Viewed 4k times
11
This question already has answers here:
What are the different widely used RAID levels and when should I consider them? (2 answers)
Closed 6 years ago.

How do you remember(if you really do :-)) all the different levels and what each level does? Can anyone suggest an easy way to remember? 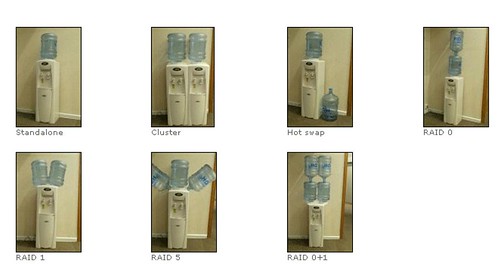 I remember them in order by the number of punches in the face a failure of any particular level equates to:

RAID 6 - six punches in the face when it fails, because you had two dang parity drives and thought you were really uber safe....until your Adaptec controller said "no arrays detected".

RAID 5 - five punches in the face when it fails, especially when your Adaptec controller says "no arrays detected"....or a second drive fails during a rebuild.

RAID 1 - one punch in the face, especially if you were using a hardware controller and thought you could just take a drive out and grab the data easily...because, hey, it's just a mirror, right?

RAID 0 - zero punches in the face, because you were expecting it and had full backups.

P.S. I do not work for Adaptec.

People seem to mostly confuse 0 and 1, but it's pretty easy to remember that RAID 0 provides zero help when you lose a disk.

RAID 2 to 4 aren't really worth remembering although RAID 4 is what NetApp uses.

Everyone seems to know RAID 5, so you just need to remember that RAID 6 is an extra parity drive. (RAID 6 doesn't really exist, BTW, it's also sometimes called RAID-DP for Dual Parity)

There is no easy way to remember it. One method i can suggest is as below Raid 0(zero means nothing) so no raid: raid with striping and no redundancy Raid 1(is the first level): so mirroring Raid 5: is striping for fast access and parity for redundancy Raid 6: striping plus double parity Raid 10: raid 1 group in striping http://www.slashroot.in/raid-levels-raid0-raid1-raid10-raid5-raid6-complete-tutorial

I like the way: "it is what you get when your disk fails".

From a security aspect:

Usually people only have problems to remember what 0 do and what 1 do.
You also have to remember 5 and may be 6 which is "5 + one(1) more parity information"

Not the answer you're looking for? Browse other questions tagged raid storage or ask your own question.

182
What are the different widely used RAID levels and when should I consider them?

1
Why don't these raid levels exists?
109
Why is Enterprise Storage so expensive?
182
What are the different widely used RAID levels and when should I consider them?
3
How should I calculate IOPS for RAID50 & RAID60?
13
How often should I scrub my RAID?
2
Convert RAID from Mechanical Disks to SSD?
5
How is raid implemented at the *disk* level?
5
write hole: which RAID levels are affected?
2
Which RAID level for virtual machines in SAN