How can I set environment variables when I ssh login to my Unix box by passing custom arguments?

I want to pass some parameters as part of my ssh connection that I can use to set custom variables for my login to do certain things or run certain scripts. How do you do this running Putty on Windows machine, connecting via SSH to a CentOS machine?

On the CentOS machine, create a file in your home directory named .bashrc and set your environmental variables in there. For example, the contents of the file can be:

Here's some discussion of this: http://tldp.org/LDP/Bash-Beginners-Guide/html/sect_03_01.html

You can also use the SendEnv and AcceptEnv options. This will allow environmental variables on the client to be passed to the server.

You will also need to change the server's sshd_config file to specify which environmental variables are accepted by the server. I'm not sure what you'll need to do with PuTTY to issue the SendEnv option, but that should get you started.

You can enter environment variables in the PuTTY configuration under Connection -> Data. 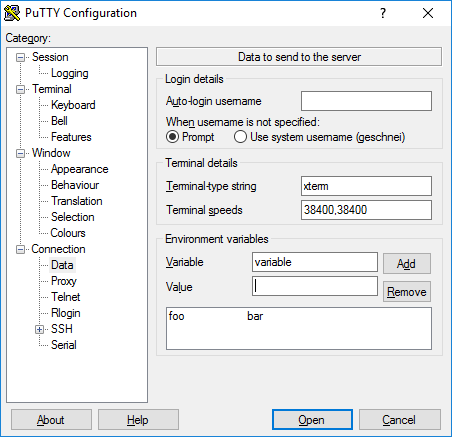 But this works only under certain conditions. Quote from the documentation:

The Telnet protocol provides a means for the client to pass environment variables to the server. [...]

Version 2 of the SSH protocol also provides a similar mechanism, which is easier to implement without security flaws. Newer SSH-2 servers are more likely to support it than older ones.

This configuration data is not used in the SSH-1, rlogin or raw protocols.

Additionally, this has to be allowed on the server side. For the OpenSSH server the configuration directive is named AcceptEnv. On an Ubuntu server it looks like this by default:

This allows you to define the variable LANG and all variables starting with LC_ in PuTTY, so you can always get the output in your preferred locale.

If you want to set additional variables you have to add them to the list on all servers you want to connect to. On older (SSH1 only) hosts it won't work at all.

You could can modify PermitUserEnvironment in sshd.conf to allow processing of ~/.ssh/environment or "environment=" options on keys in ~/.ssh/authorized_keys.

The format of these two files differs. ~/.ssh/environment is lines of VARIABLBE=VALUE where in ~/.ssh/authorized_keys the environment option is environment="VARAIBLE=VALUE"

For those, that cannot modify sshd config for various reasons and/or have +2000 servers (and no access to mass-configuration tools or can't/don't want to change settings for other users), here's a solution I came up with: 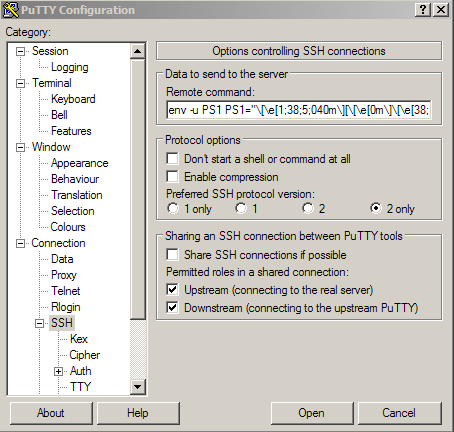 In PuTTY load the desired session, go to Connection > SSH. In the "Data to send to the server" section, in "Remote command" field use:

I unset the variable first, because it didn't work otherwise.

Not the answer you're looking for? Browse other questions tagged ssh putty startup-scripts or ask your own question.

24
How can I set proxy for subversion with ssh tunnel?
2
When connecting to a unix box, how does it know you have SSH setup on your desktop?
0
How to change Putty SSH login IP address?
2
How can I get the complete Windows Environment Variables when doing non-interactive SSH login?
19
how to tunnel Windows Remote Desktop through ssh using a linux box?
510
How to automate SSH login with password?
142
Is my password compromised because I forgot to hit Enter after ssh username?
41
How can I find current SSH protocol version of the current connection?
5
Environment variables are unavailable when running scripts over ssh
0
how to ssh into a vagrant box when working with multi-vagrant environments?