I have a small Windows 2008 network, with some Windows 7 clients. The clients are both laptops with docking stations and I would like them to communicate with the Windows 2008 server (for filesharing) through the wired network whilst they're docked.

Internet connectivity for all machines (clients and server) is via a Wireless LAN, so the wireless adapter in the Windows 7 clients stays active while they're docked.

When the laptops are un-docked, it would be nice to still be able to contact the windows 2008 server for print sharing (and slower file sharing) - hence the server also being on the wireless LAN.

The windows 2008 server is running Active Directory, DHCP and DNS. It controls DHCP leases on the wired network and holds the DNS records for "myserver.mycompany.local", which is what the filesharing clients connect to.

Ideally I'd like the DNS records to return the wired IP first so that this is the address that the laptops will attempt initially - but there doesn't seem to be a way to do that? At present the server's IP on the wireless LAN comes out of an nslookup above the wired Lan IP. The multi-homing works perfectly - but in the wrong order! Switch on the wireless lan and ping myserver and it goes to the wireless IP. Disable the wireless on the client and do the same ping again and after a couple of seconds it starts pinging the wired address.

Does anyone have any suggestions on how to make this work in a predictable order? - or even if it can work.

Alternative 1? If it can't work, then would this work: Remove the wireless adapter from the server, put a wireless router/bridge on the wired network (set up to route to/from the wireless LAN's subnet), then configure the clients with two routes to the (now) single IP of the server with metrics favouring direct communication over the wired LAN first?

Alternative 2? Should I instead single-home the laptops so all of their connectivity is via the wired-LAN while they're docked? (and route via the windows 2008 server - or a dedicated wireless bridge/router)? My concern here is that I'd like undocking to be seamless - and if the clients are in the middle of downloading something from the internet I wouldn't want whatever they're doing interupted as they switch IP addresses onto the Wireless network. Perhaps this isn't the case and I'm concerned over nothing?

I seem to have cracked it (at least DNS entries come out in the order I hope for - and pinging the server with various combinations of wired, wireless and both interfaces enabled uses the IP I want) ...

I set the binding order of the NICs on the Server (which is acting as Domain Controller, DHCP and DNS server) so that the Wired NIC is before the Wireless adapter. (Start --> type "Network Interfaces" --> Select "View Network Connections" --> Press Alt to show classic dropdown menus --> Advanced --> Advanced Settings)

Now, an nslookup (from the client) of the server's hostname returns the Wired IP first, followed by the Wireless IP. The wired IP now seems to be used whenever it's contactable. Incidentally, the metrics on the wired and wireless routes (on the client) also favour the wired LAN (based on Windows' automatically assigned metrics) - but this was always the case, even when I was having trouble getting the wired IP to be "favoured".

I'm not entirely sure if this is coincidence - or if a DNS server running on Windows, handing back IP addresses for itself does actually take the binding order of it's own network interfaces into account? It would be interesting to hear from someone who can confirm or deny that (or confirm that the binding order on the server plays a role for some other reason?)

Since you are serving your DHCP from Windows and your clients are also Windows there might be better solution that you should be looking at.

When a system has multiple interfaces and multiple default gateways set, the method that can be used to force one to take preference is to set the metric.

Instead of messing around with DNS, set the options on your DHCP server to control the metric associated with the IP. Set the metric on you wireless LAN to have a larger value then the metric on the wired LAN. This does assume that your Windows DHCP server is serving both the wired and wireless networks and they have different scopes.

If this applies go into the scope options ant set up the Microsoft Default Route Metric Base. 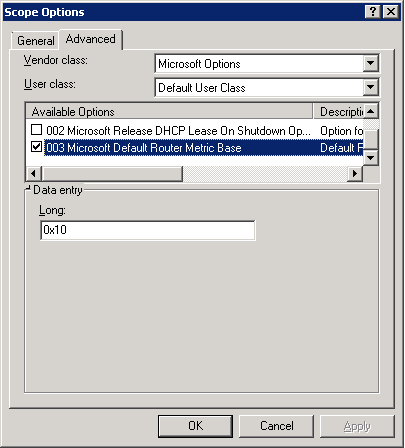 If setting a metric via DHCP is not an option, then you can also set it directly on the TCP/IP properties for the wireless adapters on those computers. The interface with the lowest value is used by default. 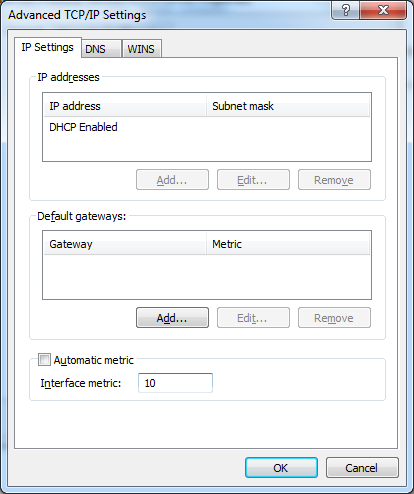 Not the answer you're looking for? Browse other questions tagged windows-server-2008 networking windows-7 tcpip internal-dns or ask your own question.

16
How to configure DNS on Windows with multiple NICs?
1
Reliable wireless chipset for 64-bit Windows Server 2008?
9
Dead gateway detection on Windows 2008 Server
66
How does Windows decide which DNS Server to use when resolving names?
1
DNS resolution Windows 7 & browsing to locally hosted web site
1
Windows Server 2008 R2 as guest in virtualbox: make accessible from all network nodes within the subnet of my host
1
How to configure multiple scopes for DHCP
0
Wireless Clients unable to connect to internet
0
Windows Server 2012 / 2008 interface binding order and route metrics