I have a Windows 2008 Server with Hyper-V installed, and a couple of VMs.

All was working properly until I tried upgrading BIOS. All of a sudden I get permission denied when attempting to start any VM, saying 'general access denied error' on the vhd file. 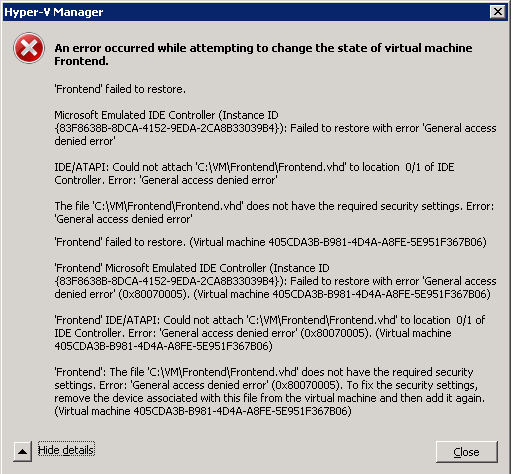 How can I fix this issue?

*Edit: Even creating a new virtual machine + disk is giving this error, but I can inspect an existing disk, and even expand it without problems. Also cdrom device is giving the same error. If I remove all harddrives and cdrom devices from settings, I may power on the VM without any 'General access denied error'.

*Edit2: I attempted to completely remove Hyper-V and reinnstall it again - same result.

This seems like an odd error to get in response to a BIOS upgrade. If you're certain those files are in those locations and the access control lists haven't been changed, I'd look at the BIOS itself. A BIOS upgrade can frequently reset the BIOS to its factory default settings. Perhaps virtualization itself is turned off.

Adding the user NETWORK SERVICE to the group Administrators solved my issue.

Not the answer you're looking for? Browse other questions tagged windows virtualization hyper-v hyper-v-server-2008-r2 or ask your own question.