I have a server with Win2008R2 and a synology NAS. On the Nas there are 6 iSCSI partitions which are mounted on the windows server. The windows server is virtualized under Hyper-V.

After rebooting the client machine, two of the 6 partitions do not remount and I have to manually remount them... every time.

Each one has a similar configuration and has been configured with CHAP authentication. All 6 appear in the favourites list.

Event log shows no errors regarding iSCSI. The other 4 partitions mount without problems.

Any suggestions for further debugging?

EDIT: After speaking with synology they suggested disabling chap authentication and enabling something called masking, which is basically a filter to block which nodes can connec to each LUN. This made a huge difference to the problem. It still occurs every now and again after power outages or similar, but after reboots I can be pretty much certain that the luns will remount. I guess its an issue between the windows iscsi initiator and the target in authentication negotiation.

Apart from Favourites list have you checked if the volumes are listed in Volumes and Devices tab in iSCSI initiator properties? And are they set to Auto Configure?

This should (in theory) make sure that all volumes are initialized. 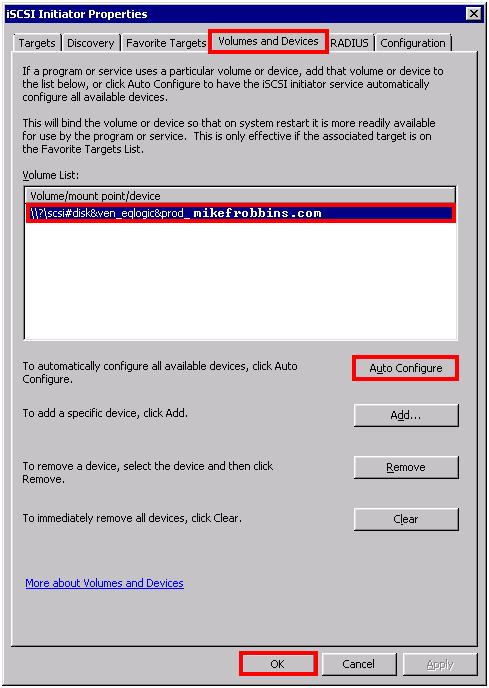 Make sure add to favorites and enable muilti-path is selected when you connect to targets:

Rather old thread, but running into the same problem these days with Windows Server 2008 R2 SP1 and a Synology RS18017xs+ with DSM 6.1.5-15254. Checked the above "auto configure" suggestion, but it does not work for me. The solution from this guy worked for me:

Just for the records.

Not the answer you're looking for? Browse other questions tagged iscsi synology windows-server-2008-r2 or ask your own question.