How to extinguish a small fire in a server rack to minimize damage to surrounding equipment?

Suppose I have a rack with several servers and other stuff. One of servers overheats severely and either starts smoking or catches fire while there's a serviceman nearby.

If anything similar happens in an apartment and there's a fire extinguisher nearby using the latter promptly often lets extinguish the fire very fast but in case of server rack improper extinguishing may lead to unneeded extra damage to surrounding equipment.

To clarify, I'm talking about a really small fire that one can try to extinguish without risking their life - like grab a nearby extinguisher, discharge it and get the fire extinguished in say ten fifteen seconds.

What's the strategy to extinguish a small local fire in a server rack? What type of extinguisher is to be used? How to minimize damage to surrounding equipment?

Definitely extinguish the fire without regard for the rest of the servers on the same rack. Any properly designed data center will have backup servers at another location for the applications to fall back on. It is better to lose a rack of servers than to lose a life or the whole data center.

This is a strange question, but I'm gonna attempt to answer it anyway.

All electrical fires must be extinguished carefully. Especially if they're still live. Fire departments will all recommend the use of a CO2 extinguisher.

In a datacentre environment, however, I'd (But I don't recommend you) do one of two things.

I'd be more concerned about the protection of the rest of the suite than the expense or damage caused by following their procedure for fires in the building. You're operating as a business, so you've got insurance, both for your hardware, and Public Liability. It'll all be covered by that if you've got a decent insurer.

It'd be better all around to hit the fire alarm and let the professionals deal with it. Electrical fires produce evil acrid choking smoke, often containing horrible toxins, and I sure as hell wouldn't wanna be trying to extinguish it without breathing apparatus.

*Halon is a bit of an odd one. It's a fantastically efficient extinguishing agent, but has a nasty side-effect of destroying the Ozone layer. I've only seen Halon extinguishers in datacentres, and even then, there's a lot of paperwork if you discharge one. It works by depleting the oxygen in the applied area, and as a result, it'll suffocate the fire, and you at the same time if you linger too long. Again, this kind of lends itself to calling the fire service. Or activating the building's fire supression system. Don't worry about the expense, that's what insurance is for.

Also.. has this just happened? I can't resist this. 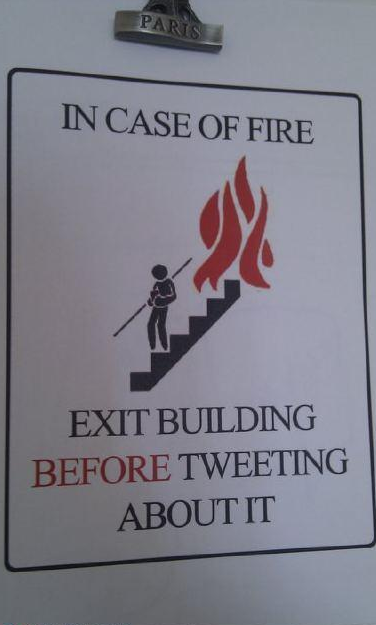 (Disclaimer: I'm an ex fire-cadet, so I've got a pretty good knowledge of fire and it's extinguishing. )

Speaking from organizational experience at my last job, a small fire in one rack can turn into a big fire with a whole rack, and very shortly afterwards, the rack next to it as well. Fire spreads fast. Once the insulation jackets of all of those power and Ethernet cables gets involved it travels. It travels really fast. Then the flames start tickling the ceiling tiles and things get really bad.

We know this from experience, though I no longer have access to the photos since I don't work there anymore.

When you get a fire, any fire, you need to treat it like you would a larger fire. Since server-rack fires can burn fast and hot, you need to have enough fire suppression in place to handle something like that:

What's the best fire suppression for a server room?

Our experience with this issue was related to having insufficient suppression in the area the servers were kept. There may have been sprinklers in the room, but considering the age of the building that was unlikely. There were CO2 extinguishers, but the problem hit when no one was in the building and therefore present to use them. By the time the Fire Department got on site, the building was well on its way to gutted. Bother.

The server room that was involved in this conflagration had maybe one point of the items on that 'best fire suppression' answer. Don't be us.

If you don't know what to do in the event of a server room fire then you shouldn't be in the server room...

By which I mean that if you have enough computers and switch gear in one place to call it a "server room" then you have enough equipment in there that could be a potential fire risk, and at that point someone needs to have a sit down and have a think about procedures for dealing with a fire in that room and all the staff who are allowed in the room should then be trained in that procedure.

You should at the very least have a CO2/Halon/similar hand-held extinguisher in that room and training available for all people who might have to use it.

If the room is large enough and/or contains enough valuable equipment then an integrated fire suppression system should be considered. We have them in both of our server rooms, with FM-200 being our gas of choice as its a fairly new install, rather than Halon, which I don't think you're supposed to use in new installs these days, at least not in the UK.

In both cases, while I'm not a health and safety bore nor do I wish to pretend to be one, this is one area where the right steps to take in the event of a fire in the server room should be given to someone before they are allowed to work in the server room, and the first step in the list of procedures should include a warning about risk of death/injury and instructions to stop fire-fighting attempts and evacuate if there are any possible doubts.

We have a CO2 extinguisher in our comms room. I guess I'd use that if I was in the room when the fire started, and noticed it. Couple of discharges at the base of the fire, then get out even if it appeared to be out, then raise the alarm.

The only time we had a fire in our comms room, it was the AC unit that started it, and luckily it didn't spread. No one stayed around to tackle it - the smoke detectors caught it before anyone did, and the building was evacuated. Having the previous nights backup tapes in a pelican case next to his desk, ready for collection by our offsite storage suppler, our network manager carried those out with him.

The fire brigade came, and it was valuable to let them know the fire was in the server room, and give them an access card. They didn't need to take an axe to the door or destroy anything - they went in with breathing apparatus, located the fire and dealt with it. So one thing worth doing is being around to talk to the fire brigade when they arrive, rather than disappearing down to the pub with everyone else...

It would have been a major disaster for our organisation if the fire brigade had run in and sprayed everything with water. Yes, we have an offsite recovery where we believe we can recover our systems within 48 hours. But we would really rather avoid having to use it.

Halon gas has been banned in most places, for many years now.

The biggest problem with the hand held fire extinguisher is that it is unlikely to be near the fire, unless it is in a very small server room. By the time you go and get it and then get back to the fire it will be too late.

Also, I took an introductory course in firefighter training... one of the first things they taught us is that those portable extinguishers don't hold very much. It is an often fatal mistake to be overconfident in the size of the fire that you can put out with one. Basically, anything bigger than a small trash bin is beyond their capability. Also If the extinguisher is not specifically rated for Electrical Fires then do not use it, you can actually make things worse and potentially electrocute yourself too.

As an electronics technician, with considerable experience in ~smoke~ testing components, ;-) I have found that killing the power is the most effective way to put out a small fire. Most electrical fires are self extinguishing once the power is removed.

So the best thing is to kill the power and leave. Given how toxic the fumes can be, either stay low or hold your breath as you sprint for the door. Don't try to be heroic, you can get pretty bad lung damage in a very short time. If anyone else is in the room do let them know too.

Any largish data center will have automatic detection and protection equipment. if your's doesn't then it is time to talk to the higher ups. Also many fire departments have excellent educational resources available, if you are hitting resistance from management about this, the fire department's outreach program may be able to help you make the case.

Naively, I would expect that any carbon dioxide or nitrogen (basically inert gas) solution should be good. It looks like there are commercial solutions out there that are even human-breathable.

There should be no inappropriate fire extinguisher near the server room and the correct extinguisher should be readily available and clearly labeled. A fire blanket should also be available and in the situation being asked about that's what I would use if it's practical to do so. Either way, try not to breathe the fumes, which will be quite toxic.

If you can't extinguish the fire in a matter of seconds then sound the alarm, get out of there and leave it to the professionals.

The other option is a fire suppression kit designed for racks, if they detect a fire they'll flood the room with an innert substance to stem the fire before it takes hold. It's pretty expensive stuff but if it's a business necessity it's the best way to do it.

I'm no expert on them but take a look at http://www.cetecglobal.com/technologies/security/fire_suppression.htm as an example.

At high end data centers, they will typically have a fire suppression system.
This systems will release a gas agent that will inhibit the chemical reaction that is fire.

Typically, this means the air is no way close to breathable, and so an alarm will air and the whole area will need to be evacuated.

Not the answer you're looking for? Browse other questions tagged hardware datacenter rack server-room or ask your own question.

57
What's the best fire suppression for a server room?

0
What network equipment do I need for a small quarter-bay server farm?
54
How is fire spread in server rooms and datacenters?
19
How to correctly move a server inside a rack up and down
2
How to protect the server rack from water streaming from above?
15
Cooling Server Rack with Water? Sensible? Reuse energy for small installation?
2
Small Office server rack - power requirements