What should I do to make sure that IIS does not recycle my application?

I have a WCF service app hosted in IIS. On startup, it goes and fetches a really expensive (in terms of time and cpu) resource to use as local cache.

Unfortunately, IIS seems to recycle the process on a fairly regular basis. So I am trying to change the settings on the Application Pool to make sure that IIS does not recycle the application. So far, I've change the following:

Will this be enough? And I have specific questions about the items I changed:

The reason for having IIS7 and IIS7.5 tags is because the app will run in both and hope the answers are the same between the versions. 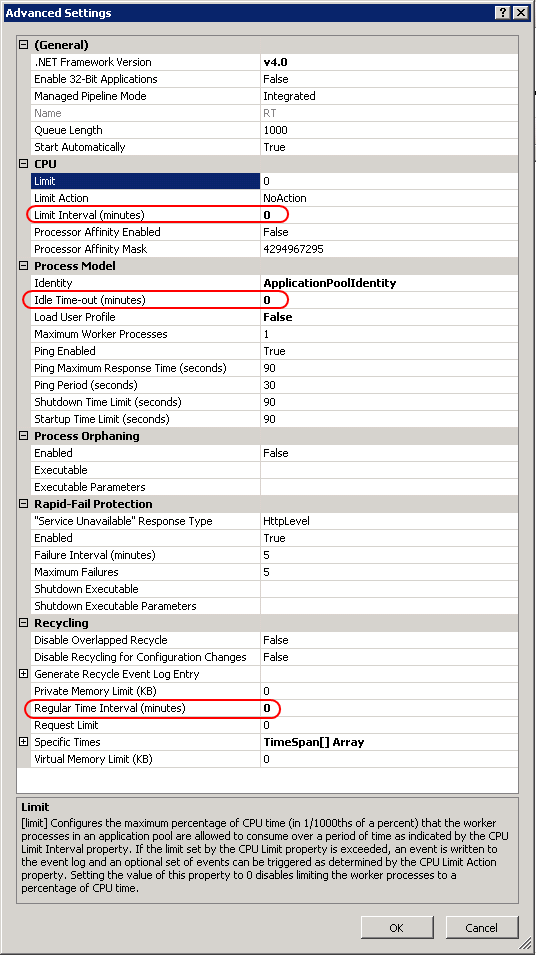 Recycling is usually* where IIS starts up a new process as a container for your application, and then gives the old one up to ShutdownTimeLimit to go away of its own volition before it's killed.

It is destructive, in that the original process and all its state information are discarded. Using out-of-process session state (eg, State Server or a database, or even a cookie if your state is tiny) can allow you to work around this.

But it is by default overlapped - meaning the duration of an outage is minimized because the new process starts and is hooked up to the request queue, before the old one is told "you have [ShutdownTimeLimit] seconds to go away. Please comply."

To your question: all the settings on that page control recycling in some way. "Shutdown" might be described as "proactive recycling" - where the process itself decides it's time to go, and exits in an orderly manner.

Reactive recycling is where WAS detects a problem and shoots the process (after establishing a suitable replacement W3WP).

Now, here's some stuff that can cause recycling of one form or another:

That's enough to cause a well-behaved process to live forever. If it dies, sure, it'll be replaced. If it hangs, pinging should pick that up and a new one should start within 2 minutes (by default; worst-case calc should be: up to ping frequency + ping timeout + startup time limit before requests start working again).

CPU limiting isn't normally interesting, because by default it's turned off, and it's also configured to do nothing anyway; if it were configured to kill the process, sure, that'd be a recycling trigger. Leave it off. Note for IIS 8.x, CPU Throttling becomes an option too.

An (IIS) AppPool isn't a (.Net) AppDomain (but may contain one/some)

But... then we get into .Net land, and AppDomain recycling, which can also cause a loss of state. (See: https://blogs.msdn.microsoft.com/tess/2006/08/02/asp-net-case-study-lost-session-variables-and-appdomain-recycles/)

Short version, you do that by touching a web.config file in your content folder (again with the picking!), or by creating a folder in that folder, or an ASPX file, or.. other things... and that's about as destructive as an App Pool recycle, minus the native-code startup costs (it's purely a managed code (.Net) concept, so only managed code initialization stuff happens here).

Antivirus can also trigger this as it scans web.config files, causing a change notification, causing....

Why Do We Recycle Our Application Pools?

if you browse the web to find the reason why application pools are configured to recycle automatically periodically, you’ll be hard pressed to find a reasonable answer that doesn’t pertain to memory issues. It’s like the community in general has pretty much accepted the fact that our web applications (or service layers hosted in IIS) will need to be recycled to avoid memory problems.

I’ve always been of the opinion that if your code requires periodic restarts to keep working correctly, then something is clearly wrong. There is a bug in your code somewhere and you need to fix that, instead of restarting the process occasionally to make the problem ‘go away’.

Really need to start focusing more on memory management in .NET and on making sure that our applications can keep running without problems.

The answer is, you can prevent the AppPool from ever recycling, but you should not.

The reason being that if there is a memory leak, it will eventually eat up all of the memory of the server and Windows will blue screen or throw out of memory exceptions that will take down other sites on the same IIS Server.

So, decide how much memory is permitted to be used by that site, and set the above settings to recycle when that limit is reached.

Normally, the recycle is done gracefully so end uses are not aware of it. But if you are using Blazor Server, then all sessions run on the server, and all state will be lost. In practice, I see a Blazor App show the "connecting..." message for about 5 seconds while the recycle occurs. In other words, it is not graceful for Server Side Blazor apps.

The moral of the story is what was mentioned earlier, ensure your site does not leak memory. Test your memory early in the Dev Process, don't wait until it goes live, as Blazor Server is memory intensive and my experiance is that I have had to spend quite a bit of time debugging memory issues. This is not a fault of Blazor, it is just in the nature of Blazor Server apps to require very tight code. Earlier in .net, I never worried about memory as the GC would handle all of that, but running inside IIS is a different story.

7
Windows Server 2008 - IIS 7 - ASP.NET - Does my web server go to sleep? How do I keep it awake?
1
On app pool recycle user sessions are lost if application pool identity is set to 'custom account' but not when it is set to ApplicationPoolIdentity