Is there a way to run virt-manager on Windows?

We've been using KVM for almost a year strictly on CentOS 5.x as the KVM host, with Fedora and Ubuntu workstations accessing the KVM host and its guests using virt-manager, virt-viewer, and ssh.

I'm familiar with running a X11 server on windows such as Xming, and remote displaying virt-manager from the KVM host to a windows workstation, but what I'd really like here is to know of any solutions native to windows, i.e. is there a version of virt-manager that'll run on windows.

Still no progress on this myself wrt. a native virt-manager client. I did come across a compiled version of libvirtd for windows along with a discussion on a mailing list about how to get libvirtd working on windows. I'm adding the links to this question in the hopes that someone will figure out how to get virt-manager working.

Finally some progress. Came across this project on github called msys_setup which includes a windows port of virt-manager. It's partially functional, doesn't support qem+ssh:// connection type so it's still not usable for our needs, but it's a start.

Use putty and some X Server software on the Windows side (e.g. Xming) and use X11 tunneling with putty to display the remote virt-manager console.

I would use Cygwin. Then you can install virt-manager and openssh and place a shortcut on the Desktop. It is native.

Cygwin provides the linux tools and facilities around programs so that it feels like a linux environment. For instance, virt-manager can call ssh to make the connection to your KVM Server and would be able to run virsh and send commands to it. It also provides an X-Server. Which is all natively compiled.

Update: Thanks Yaakov's comment: There is now a directly installable package in cygwin for virt-manager. The actions below are not necessary anymore.

If you have the time: You can easily customize the cygwin installation to exactly fit your needs. Just go through the folders, throw everything out you don't need. Write a script that starts the X Server and then virt-manager, zip it up and ey presto! there's your virt-manager for Windows.

I would simply use ssh (putty) and virsh, and a VNC/Spice client (like virt-viewer for Windows), if I were confined to a Windows workstation

Here is a up-to-date instruction set performed by me today and saved here for my future reference:

The first error is not a problem, just add a new connection and remove the local connection and you are up and running. If your connections are not saved between starts of the virt-manager, you need to perform the dbus session.conf trick:

Edit the configuration file: sudoedit /etc/dbus-1/session.conf and edit the first line or add the line such that the file contains:

Yes. There is virt-viewer for Windows

I see you were asking about virt-manager on windows and not virt-viewer.

You could use Bash on Ubuntu on Windows ( https://msdn.microsoft.com/en-us/commandline/wsl/about ).

Then, you are able to install virt-manager as on Ubuntu:

Then you'll need a X server. You can install Xming.

You'll need to add DISPLAY=:0.0 to your environment. To do that, add export DISPLAY=':0.0' to ~/.bashrc and restart your terminal.

You may want to enable a ssh agent:

After that, you should be able to run virt-manager as you'll do on Linux. There are some bugs but it works :-).

Adding a "HowTo" on AndreasT Answer as it is the "best option" IMO ATM. Although using Bash + Windows Subsystem for Linux might be another option, it was unavailable on Windows 10 LTSB and I really hate how I can't backup Windows 10 Store Apps, so it would need to be re-configured/install each time Windows was deployed.

And I wrote up my own blog post, but I know better than to leave out the details in a URL so I will copy the short form here. (https://www.freesoftwareservers.com/wiki/running-virt-manager-inside-windows-10-using-cygwin-with-shortcut-on-desktop-28016650.html)

Create shortcut on Desktop: Virt-Manager.cmd
This is the contents of mine: 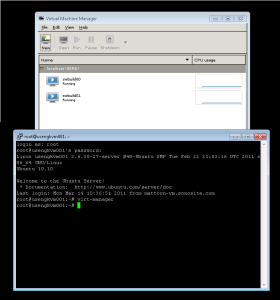 Not the answer you're looking for? Browse other questions tagged windows virtualization kvm-virtualization or ask your own question.