So, let me put the disclaimer in first: I wouldn't typically piggy-back IIS on a domain controller, but that's what I've got and I can't change that in this instance.

I've got a WCF web service I need to host here. I'd like to be able to use an application pool identity from IIS to grant filesystem permissions as well as Launch and Activation Permissions in component services. I'm not able to find the account when I browse for it by trying to select "IIS AppPool\DefaultAppPool".

Does anyone know if this is even possible on a 2008R2 domain controller?

Granting permissions to Application Pool Identity's via the UI on Windows 2008R2 can be a bit prone to not working now and again, but can be achieved using a couple of command line tools.

Use the ICACLS command line tool to set NTFS permissions:

The above configures the DefaultAppPool identity to have Modify permissions on c:\wwwroot with File and Folder inheritance. In the UI it looks like: 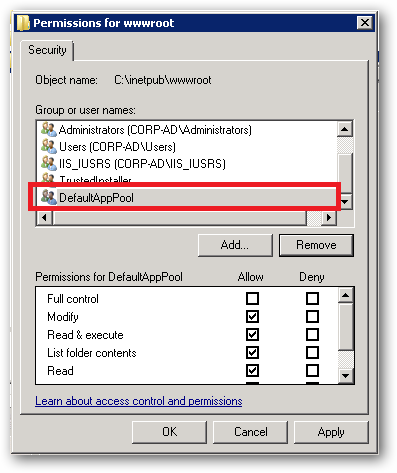 and under the permissions Advanced UI: 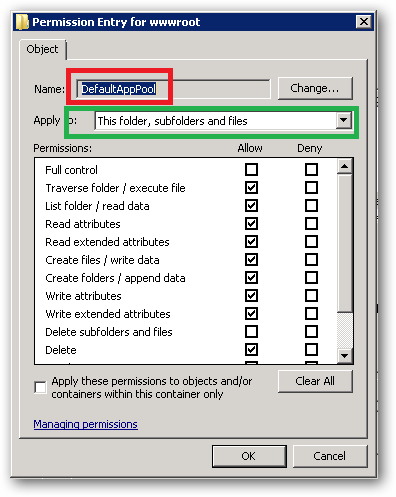 Again, the UI can be a bit hinky here when it comes to IIS AppPool\<ident> accounts and there's no built-in command line tool to configure Launch and Activation Permissions and Access Permissions. You could try setting these values in the registry but unless you know how to create a serialised ACL for LaunchPermission and AccessPermission it's going to be hard going.

All is not lost though. There's a tool called dcomperm.exe which is included as a sample project in the Microsoft Windows SDK for Windows 7 and .NET Framework 4.

This chap has written about it here:

Another step closer to the 100% scripted SharePoint installation with DcomPerm.exe

You can try and build it yourself or download a prebuilt binary from his Microsoft Live SkyDrive.

To use dcomperm.exe it you'll need to know the AppID of your DCOM app. You can do this by locating it in the General tab of your application's DCOM configuration properties. For example, I've picked the IIS CertObj library as a working example.: 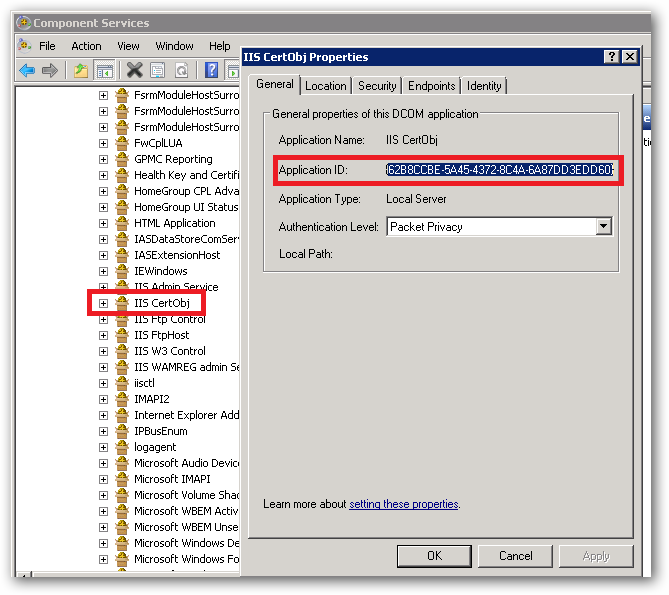 You can place your cursor in the Application ID field and select the whole field, make sure you include the curly braces as well.

Next open a command line prompt (running as Administrator). To grant your application pool identity Local Launch and Local Activation permissions you would execute: 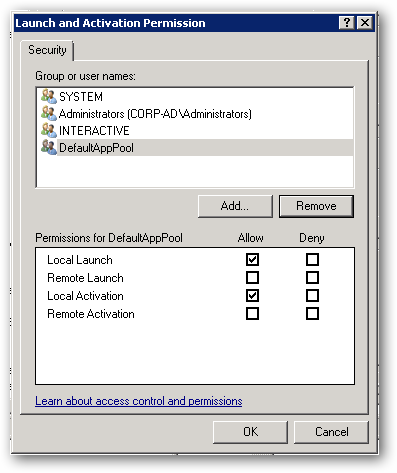 It seems that if you are running a domain functional level earlier than 2008, the built-in IIS accounts cannot be resolved from the GUI.

Either raise the domain functional level to at least 2008, or try running the JScript provided by Microsoft in KB946139

This is concerning issues with IIS 6/Windows 2k3, but some of it still holds true, eg. the DCPROMO issue

Not the answer you're looking for? Browse other questions tagged windows-server-2008-r2 iis-7.5 domain-controller security or ask your own question.