We have the following domain setup:

Our issue is that when the staff log onto the Server 2008 terminal servers they are automatically logged off after just over 5 minutes.

In the security log of the terminal server is this event:

and then 10 seconds later is this:

The end user gets a message that they will be logged off in 2 minutes. There is no event recorded on the client machine (all Windows XP)

We have used terminal server mandatory profiles but that made no difference. The problem does not happen for administrators.

I wonder if any of you can help?

UPDATE1: For people asking about CALs, the DC is the terminal server licensing server and always works well. At the moment on the 2008 TS it shows as 426 CALS available for clients. They are licensed in per device" mode.

UPDATE2: There is something odd about the timings in the Terminal Services Manager. Many dates show up as the time that all computer times are worked from - 01/01/1601. Here is a screenshot as the problem user is logging on:

When the username is resolved the time is corrected also - does that make it look like the user have been loggged on for over 400 years though?

Have any of you seen this kind of thing before and would you know how to resolve it? I've checked with another site and the 1601 year is not the same there.

UPDATE3: Forgot to say that the logoff does not happen because of 5 minutes of inactivity - it happens no matter what the user is doing.

UPDATE4: Licensing issues. It looks like there is some kind of terminal server licensing issue - though none of the servers are giving licensing errors. The licensing server is a DC which showed plenty of valid licenses available (all Per Device) it showed a lot of temporary device CALs issued however and those could not be revoked. I completely removed the licensing role and set it up again. This left me with 500 Server 2003 and 500 Server 2008 Per Device CALs free, but only a few machines are being allocated a CAL, some are being issued temporary CALs, but most seem to be not showing up at all. There are some devices being listed as "unknown" as the machine name, so I'm sure this must be at the heart of the licensing problem - though I have no idea if this is in any way connected to my logon problems. BTW, when I click on the Terminal Server Configuration page on any terminal server they report that there are no licensing issues detected.

I've seen this happen when I've left the default trial licenses installed in terminal services licensing manager. What happens is that the TS License server hands them out before the bought ones for some reason - i never dug into this too deeply just deleted the demo licenses.

Check the settings on the RDP listener.

Check your domain timing. Also check the sessions tab of the user in Computers and Users.

We had similar connectivity problem when time at server and client wasn't synchronized. Time synchronization helps.

Sounds like we've hit all the normal config places...

So to help troubleshoot I would temporarily set the server TS Configuration Properties > Sessions "Active session limit" to Never (force it by overriding user settings) and see if that fixes it. 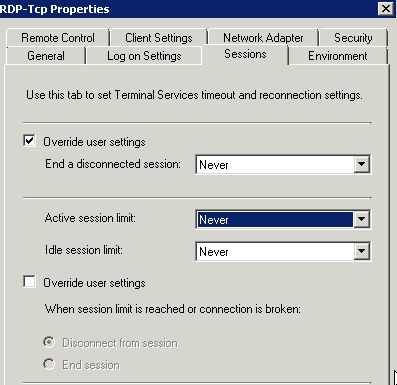 I see your time is setup correctly on your machine. Did you setup the timeserver for the machine in your network? Did you check at least one of the machines other than yours? Check the time on them?

Not the answer you're looking for? Browse other questions tagged windows-server-2008 terminal-server roaming-profile windows-terminal-services or ask your own question.