My server doesn't seem to be caching anything well

This server has some severe performance issues, however. First, a quick explanation of what this server runs:

The webserver mainly serves up MediaWiki. Caching is turned entirely off in MW's configuration; enabling memcached is actually slower somehow, even though memcached reports decent to great hit rates when enabled (60%, then rises to 90% over time).

The biggest chokehold that seems to be strangling my server's performance is just disk i/o. It's so bad that even a simple ls can take forever:

At some times it can get really bad, like this. It's gone further, but...

The iowait can be so awful at times that even restarting mysqld will actually fail because it times out. (Attempting to /etc/init.d/mysqld restart again will work, though, usually much faster).

I'm at a loss for what to do next.

Here is a chart from Monit showing the CPU usage at this particular time (the drop at the right being when I restarted Apache and MySQL): 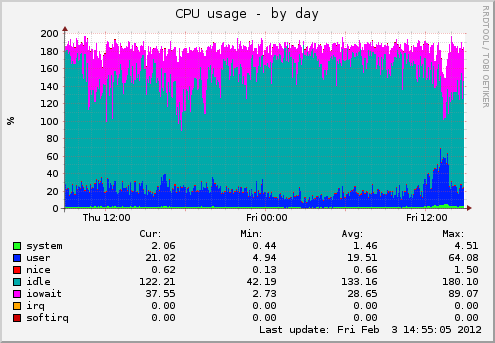 The server isn't exactly choking on RAM, either. Trying to search for a way to increase caching (outside of increasing MySQL's key cache and other things) has proved mostly fruitless; even with outright doubling the cache sizes in MySQL it doesn't seem to have made much of an impact yet. 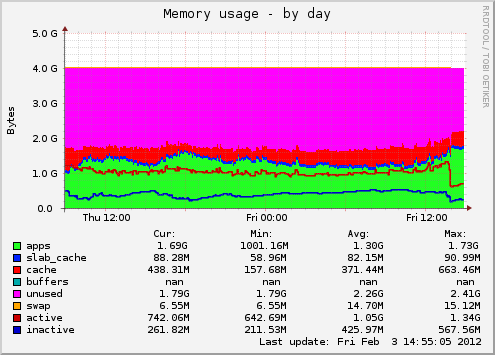 If you think it will help, you can also view the full stats page with rolling charts.

You're mostly out of options with regards to making the VPS perform better since you're sharing the system with many others (sounds like the days of mainframes are returning \o/ ).

I would say get a dedicated server, or at the very least make sure to choose a VPS provider who doesn't over utilize its servers.

Not the answer you're looking for? Browse other questions tagged debian performance cache or ask your own question.

1
APC (php accelerator). What situations should I use this?
0
What OS, hardware, and how to optimize server for high volume traffic
4
Varnish doesn't seem to be caching
1
Nginx caching webpages? Users have to refresh everytime to see updates on the home and articles
2
Should CPU usage be so low while memory usage is high on heavy mysql server?
2
Various problems with software raid1 array built with Samsung 840 Pro SSDs
6
Slow copying between NFS/CIFS directories on same server
1
Ubuntu LAMP server busy at peak hours
0
Caching setup for my webserver (varnish, bcache)