Windows 2003 shutdown instead of reboot

I've got a very strange problem. On the net I can only find problems with Server 2003 pc's, that reboot instead of shutting down, but in my case... (go figure) it does the opposite. When I choose to reboot, the system shutdown.

Nothing changed to the system's hardware. Only update's have been installed on the system.

I did notice something odd in the logs when rebooting: Description: Timed out sending notification of target device change to window of "C:\WINDOWS\Explorer.EXE" KB: http://support.microsoft.com/kb/924390 They talk about a removable drive, but in my case, it's explorer.exe :s it appears 4 times.

Are you physically on the server, or running RDP? I've found that funky things happen with reboots unless you're connected in "console" mode. To get this, you'll need to run mstsc /admin (Vista) or mstsc /console (XP)

It's possible that one of those updates affected your server's shutdown sequence. On the sight of a bad shutdown/reboot, most machines by default are supposed to reboot (Windows is designed to reboot on a critical failure). If this setting is unchecked ("Automatically restart"), I'm not sure but could be possible that the machine processes a shutdown instead of a nice restart. I can't prove this right now though.

Update: You could also try it from the command line too as Jeremy suggested, but run it without the explorer shell running (explorere.exe). Make sure it's closed, run task manager>run>cmd, and run the restart command. If this successfully reboots the machine, you might want to use that hotfix MS is talking about.

Also, here you can find some more troubleshooting ideas for shutdown/restart issues: http://www.aumha.org/win5/a/shtdwnxp.php 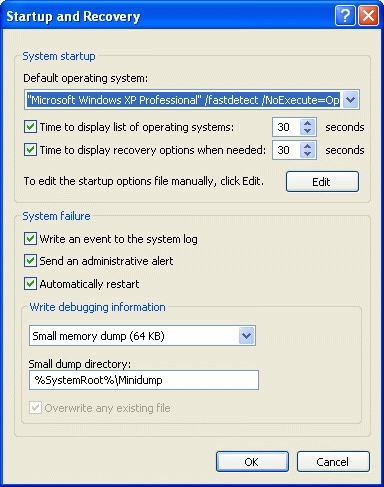 AFAIK the option to install updates and restart dont exist.

If you choose to install updates, you can only choose "install updates and shutdown". a restart doesn't install the updates (from windows update).

Or did I misunderstand your definition of "updates"?

Most likely your ACPI got a bit mixed up, look in the BIOS if by any chance there is something to customizes ACPI states, look for s2 being mapped to reboot. From an OS perspective the software is most likely performing the correct shutdown procedure.

Not the answer you're looking for? Browse other questions tagged windows-server-2003 or ask your own question.