Can I have multiple DHCP servers on one network?

Ask Question
Asked 10 years, 9 months ago
Modified 3 years, 7 months ago
Viewed 380k times
116
Want to improve this post? Provide detailed answers to this question, including citations and an explanation of why your answer is correct. Answers without enough detail may be edited or deleted.

This is a Canonical Question about Redundant DHCP Servers.

Is it possible to have more than one DHCP server on the same LAN? What are the implications of doing this?

I’m assuming a basic knowledge of what DHCP does and how to configure your DHCP server of choice in this answer, but before we talk about multiple DHCP servers on the same network, let’s first of all quickly re-cap how clients receive IP addresses from DHCP at the most basic level.

DHCP on a simple network works using the DORA principle.

Any device on a network segment can be a DHCP server; it doesn't have to be the router or the domain controller or any other "special" device on the network.

When the devices on your network first request an IP address or reach the end of their leases (or you force them to check their lease is still valid) they will simply broadcast a request for a DHCP server, and will accept an offer from the first DHCP server to reply. This is important to remember as we look at the options for multiple DHCP servers below.

If you have several VLANs or physical network segments that are separated into different subnets, and you want to provide a DHCP service to devices in all those subnets then there are two ways of doing this.

When most people ask about “multiple DHCP Servers on the same network”, what they are usually asking for is this; they want more than one DHCP server issuing the same range of network addresses out to clients, either to split the load between multiple servers or to provide redundancy if one server is offline.

This is perfectly possible, though it requires some thought and planning.

From a “network traffic” point of view, the DORA process outlined at the start of this answer explains how more than one DHCP server can be present on a network segment; the client simply broadcasts a Discovery request and the first DHCP server to respond with an Offer is the ‘winner’.

From the server’s point of view, each server will have a pool of addresses that it can issue to clients, known its address scope. DHCP servers that are serving the same subnet should not have a single “shared” scope, but rather they should have a “split” scope. 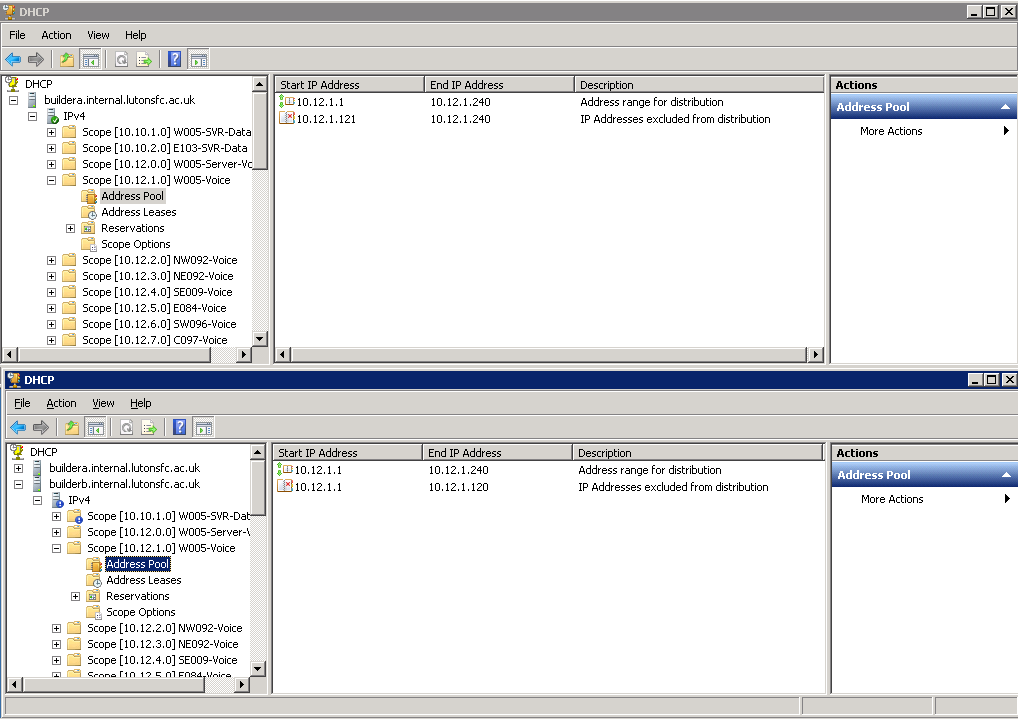 Microsoft's more recent implementations of DHCP have a wizard to make splitting your scope like this easy to do, described in a Technet article that might be worth looking at even if you're not using the Microsoft DHCP implementation, as it illustrates the principles talked about here quite nicely and this answer is already long enough.

The idea behind splitting the addresses 80/20 is because 80% of the addresses available should hopefully be adequate for all the addresses needed on a subnet, and DHCP leases are typically issued for several days; so if your main DHCP server goes down for a few hours then it's unlikely that more than 20% of the machines on that subnet will need to renew their addresses during the downtime, making the 20% pool of addresses sufficient.

This is still reasonable advice, but it assumes two things:

These days (as you can see from my examples) I tend to prefer 50/50 splits, which I think are a more realistic answer to the above points.

Another thing to consider when creating your scopes on the DHCP servers is configuring the full scope into each server and excluding the range given out by the other DHCP server. This has the benefit of “self-documenting” the DHCP info for the full subnet on each DHCP server which will improve clarity for anyone else trying to understand what is going on, and also in the event of one of your DHCP servers being offline for some time, you can temporarily reconfigure the exclusion range on the other server to allow it to pick up the slack.

Lastly, its worth remembering that you can combine the principles discussed above - you can place all your DHCP servers into one or more "central server" VLANs and use BOOTP relay agents on all your routers to send all DHCP requests from a very large and segmented network to a centralised DHCP service (which is what I do, see below). Or you can have DHCP servers distributed throughout your network, with a "main" DHCP server in its local subnet and a "reserve" DHCP server on a "nearby" network segment providing a small amount of addresses as a backup - you could even have two DHCP servers in their own network segments configured to provide an 80/20 range of addresses for each other. The most sensible choice will depend on how your physical and logical networks map to each other. 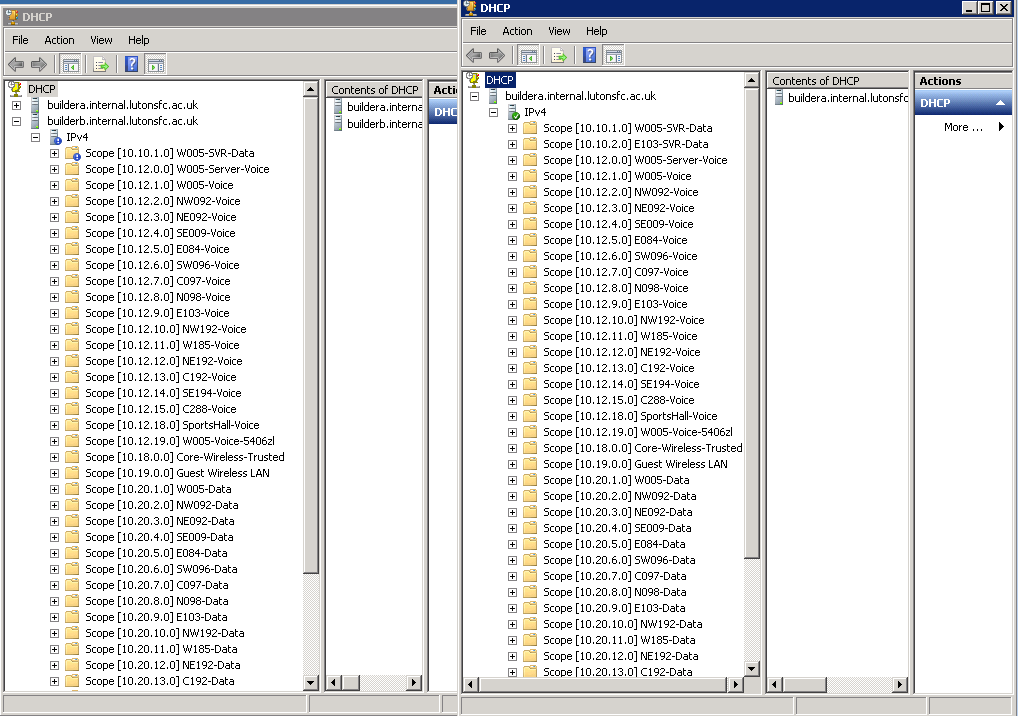 I adopted this approach some years ago for a small-to-medium size (500 user) network with considerable benefits. DHCP ceased to be a single point of failure. By permanently associating MAC and IP addresses, we ensured that both DHCP servers gave the same response to each DHCP request. Knowing the IP address of every network asset also simplified network administration, and DNS could run off the same database. The system used Internet Software Corporation BIND and DNS, and the associated scripts can be downloaded at https://web.archive.org/web/20121031051901/http://www.pearbright.com/index.php/download/25-dns-dhcp-download.

An Alternative would be to use true ISC DHCPD failover: https://kb.isc.org/article/AA-00502/0/A-Basic-Guide-to-Configuring-DHCP-Failover.html