How to turn off Windows Azure's “This copy of Windows is not genuine” message?

Is there any setting/configuration item to avoid Windows Azure from printing that error on the screen or detecting it? I've put a screenshot below that shows the message when you RDP into the web role. My web role runs on Windows Azure Guest OS 1.17 (variant of Windows Server 2008 SP2) 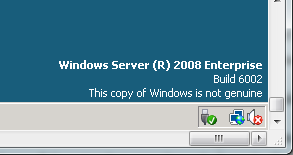 Background: I was explaining our architecture to some outside engineers (NDA'd and all) and had to demystify the webrole as they were unfamiliar with Azure. I RDP'd into the VMs running the Web Role when one of their engineers gasped "are you guys running pirated copies of Windows in the cloud?" I also noticed that within the RDP screen, the Azure machines had "This copy of Windows is not genuine" on the bottom left corner.

Now obviously, Microsoft is running their own OS in their own datacenter with no influence from me. So no 'piracy' here, despite that obvious warning. However, they seemed so distracted by this ("how can it be? really? hmmm?") that we wasted more time talking about it than the actual matter at work. Like I said, they have little exposure to Azure but have value add elsewhere. I want to get rid of this so I don't have to explain this in the future.

PS Microsoft: If you're going to modify Windows Server <XYZ> into Windows Azure <A.B> , you should also modify the code that verifies product integrity.

I'm pretty sure this only shows up with OS family 1 (Windows Server 2008 SP2). If you were to change osFamily="2"(Windows Server 2008 R2) in your ServiceConfiguration.cscfg and update your deployment, you shouldn't see that on the desktop. This is where the setting lives:

Depending on your configuration management practices, it might not be practical to simply change an OS version and redeploy. For demo purposes, it might be worth pushing up a simple single-instance VM (worker or web role - doesn't really matter) running osFamily="2" and RDP-ing into it to show that the desktop has no warning on it.

For more info on OS families, see this page.

Not the answer you're looking for? Browse other questions tagged azure or ask your own question.

2
How do I setup sending emails from Windows Azure through my company server?
1
Mounting an Azure blob container in a Linux VM Role
1
DNS setup problems with Windows Azure VPS
2
Cannot Login RDC: An authentication error has occurred (Code: 0x8007001f)
0
Licensing users in Visual Studio Team Foundation Services
1
After installing RDS on WinServer 2016 I still can only connect with two users?
2
32-bit VMs on Azure have only 1GB of usable RAM
1
Can I forward content from one Azure Log Analytics Workspace to another?