I've also setup a completely different VPN server on another network outside of our office. The functioning clients connect just fine - the Server 2008 R2 machine doesn't. Thus it's definitely a problem with this machine in particular.

I've rebooted it. I've disabled the firewall, no dice on either.

I've run PPTPSRV and PPTPCLNT on the server/client and they're able to communicate perfectly - indicating there's no problem using neither TCP1723 nor GRE.

I'm not sure what my next debugging step would be; any suggestions?

EDIT: The event log on the server has the following warning from RasMan:

Obviously this points to GRE being a potential problem. But seeing as I have other clients connectiong without problems, as well as PPTPSRV and PPTPCLNT being able to communicate, I'm suspecting this might be a red herring.

EDIT: Here are the anonymized events logged by the client in chronological order:

While the server shows the incoming client requests, but apparently without replying:

Given that this is GRE traffic, I think rules out the GRE traffic being blocked. Question is, why doesn't the server reply?

This is the Configuration Request the server receives from the non functioning client (meaning no response is sent to the client request): 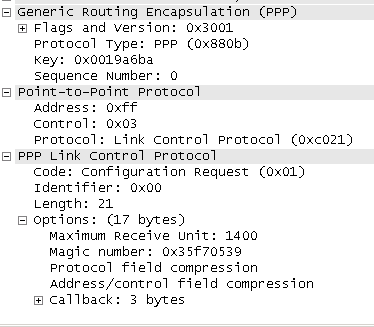 And this is the Configuration Request the server receives from the working client: 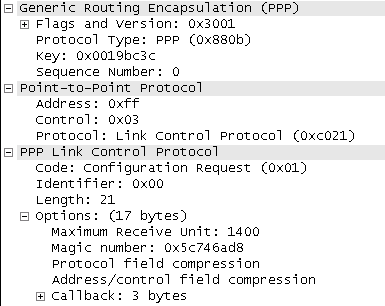 To me they seem identical, except for differing keys and magic numbers, and the fact that one client receives a response while the other doesn't.

The thought that the ISP or other remote issue is spot on. We have seen this many times with staff working remotely. The ISP or the IT department at the remote sites block VPN traffic.

Have also seen issues with some home routers not properly permitting PPTP. We connected directly and tested which then pointed to the ISP or the home hardware

Not the answer you're looking for? Browse other questions tagged windows-server-2008-r2 firewall connection pptp gre or ask your own question.