I have a HyperV cluster made up of 3 hosts. Each host is connected to both of my Nexus 5548 switches running in an etherchannel. LACP on the switch and NIC teaming using Broadcom 802.3ad on the server side. This gives me 2GB of bandwidth and also provides fault tolerance.

I ran a packet capture and saw the HyperV host send a gratuitous ARP with the IP of the VM and the MAC of the host instead of the MAC of the VM. I lose layer 3 connectivity when this happens. I have to manually clear the ARP entry from the switch or wait about 7 minutes for it to correct itself.

I did some looking around and people are having similar issues when dealing with NIC teaming using Broadcom. Has anyone seen this? Any advice?

I am only having this problem when teaming using Link Aggregation 802.3ad. The Broadcom teaming options are...

Okay. After 3 weeks of intense battle I finally got it all figured out.

I opened a case with Broadcom support and after going back and forth for a few days here is the response I received from a Broadcom software developer.

Seeing a (vm_ipv4, host_mac_addr) or (vm_ipv6, host_mac_addr) pair on a remote station or switch is okay for many networks. Basp will handle the muxing of the addresses and make sure the vm's get the correct packets.

However, a few network configurations require the ip address to map to the vm_mac_addr. If you want to use the vm_mac_addr instead of the host_mac_addr, you need to add the HyperVMode registry key listed below.

PS. Besides this registry entry being only available on >=basp6-1.5.1, it is only applicable to slb team types, and does not apply to lacp or gec teams.

So with that said I gave it a try. First, I applied created the registry key. Then, I changed the Virtual Switch to Private Virtual Machine Network mode. I gave the server a quick reboot. Finally, when the server came back online I configured the Virtual Switch back to External Mode and choose the BASP Virtual Adapter. I tested Live Migrations and everything worked perfectly and the ARP tables in the Nexus showed the VM_IP and the VM-MAC. YEY!!!!

Here is the setting within SCVMM. I was having issues like you until I turned on Trunk mode for the Host. If you right click on the host in SCVMM --> Properties --> Networking tab 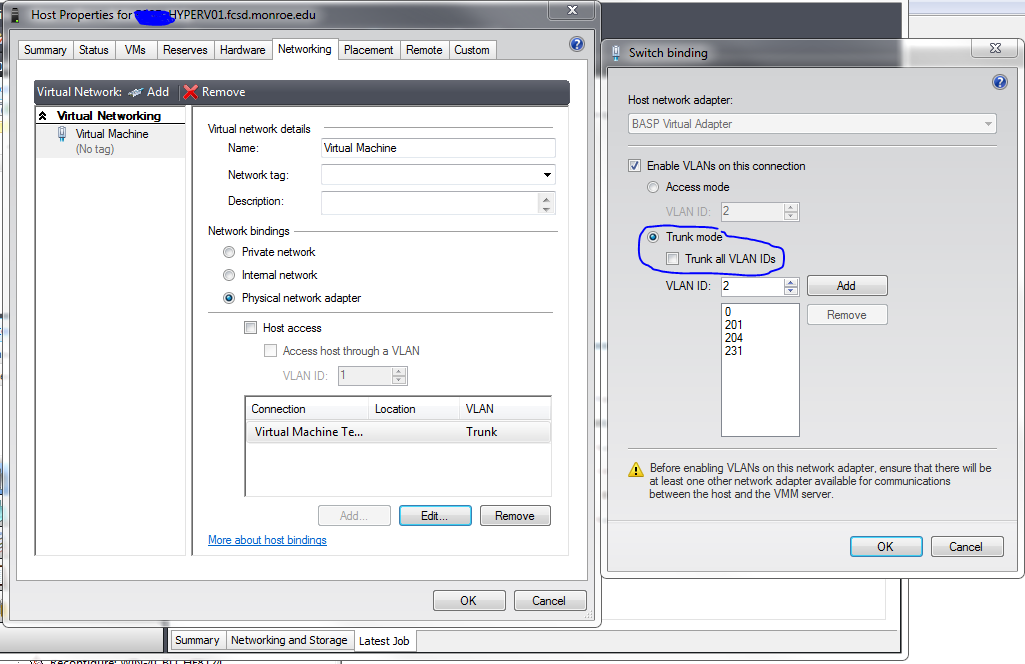 Not the answer you're looking for? Browse other questions tagged hyper-v-server-2008-r2 nic arp mac-address broadcom or ask your own question.