How to interpret output from Linux 'top' command?

Following a discussion made HERE about how PHP-FPM consuming memory, I just found a problem in reading the memory in top command. Here is a screenshot of my top just after restarting PHP-FPM. Everything is normal: about 20 PHP-FPM processes, each consuming 5.5MB memory (0.3% of total). 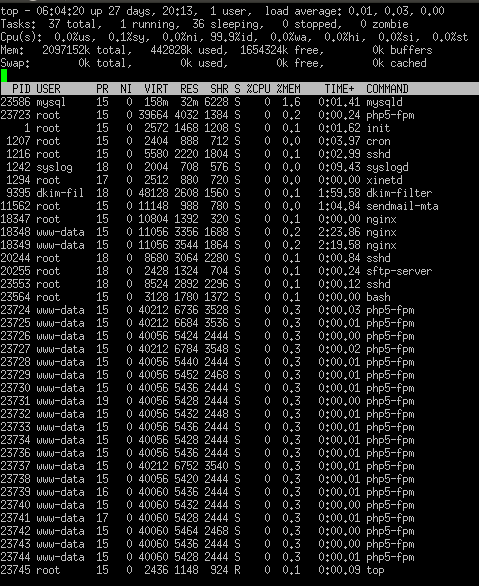 Here is the aged server right before restart of PHP-FPM (one day after the previous restart). Here, we still have about 25 PHP-FPM with double memory usage (10MB indicating 0.5% of total). Thus, the total memory used should be 600-700 MB. Then, why 1.6GB memory has been used? 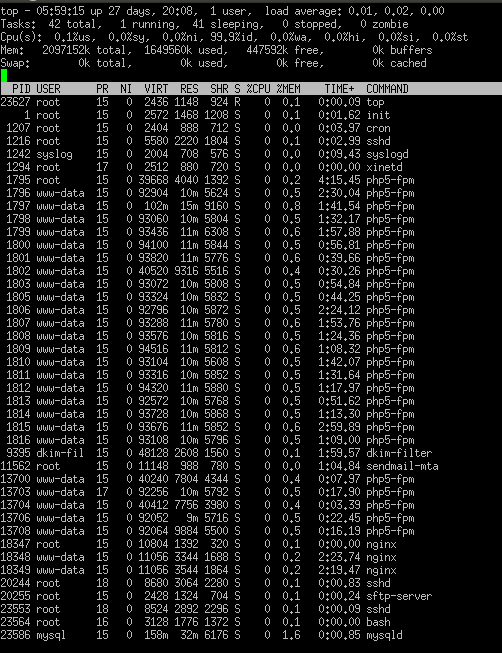 Your server is within some kind of virtuozzo/openvz/virtualization-du-jour container. Trying to make sense of memory usage is tilting at windmills.

Linux ate your RAM! But that's okay, it does it to everyone.

Let's break it down!

In the Mem: section we have:

In the Swap: section we have:

The interesting part comes when you run free -m. You'll see three lines, and all of the numbers will correlate with top. I'll give my own PC as an example:

What does all this mean? It means that Linux ate your RAM! The short story is that the Linux kernel gobbles up RAM as it is available to use for disk caching. There's nothing you can do about it unless you feel like trying to compile a custom kernel. Pro Tip: Don't.

The RAM is really there and free for processes to use at their whim. That's what's meant by the -/+ buffers/cache: row in free -m. However, you're inside non hyper-visor virtualization container which makes things a bit squirrely. You simply can't take stock of your memory with byte accuracy at this point. However, you're not seeing any behavior that's terribly unusual.

Keep Calm and Carry On. Also, get a physical server (unless you like memory statistics that look like Kreskin is your SysAdmin).

Top isn't the best way to check memory usage. However, since my question was marked as a duplicate of this question, I'm going to post my resolution here.

I read on a forum that ps_mem.py will check the memory usage for you.

Not the answer you're looking for? Browse other questions tagged linux memory shell top or ask your own question.

3
PHP APC and Linux "free" interpretation
0
Top not accurately showing memory usage
3
How to free PHP-FPM memory?
0
My server is running out of memory, despite having all swap free
0
Linux server memory allocation
1
Acceptable memory limits on a VOIP, MySQL and HTTP server

4
how do you interpret output of top?
1240
How can I sort du -h output by size
0
VPS eating up too much memory
2
Linux Nginx + php-fpm + cron + mysqld = always out of memory
30
How to get top command output to show rake arguments?
34
Unusually high dentry cache usage
1
php-fpm: why do I have a process memory usage higher than memory_limit