Avoiding SPOFS with GlusterFS and Windows

We have a GlusterFS cluster we use for our processing function. We want to get Windows integrated into it, but are having some trouble figuring out how to avoid the single-point-of-failure that is a Samba server serving a GlusterFS volume. 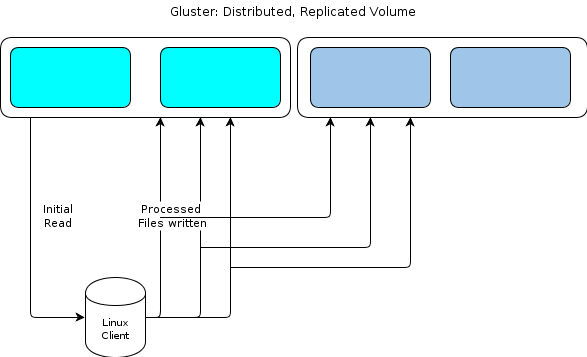 Gluster is great since it provides a distributed volume, as well as instant replication. Disaster resilience is nice! We like it.

However, as Windows doesn't have a native GlusterFS client we need some way for our Windows-based processing nodes to interact with the file store in a similarly resilient way. The GlusterFS documentation states that the way to provide Windows access is to set up a Samba server on top of a mounted GlusterFS volume. That would lead to a file flow like this: 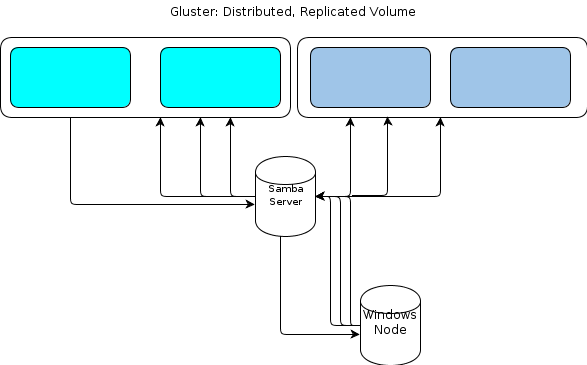 One option is to cluster Samba, but that appears to be based on unstable code right now and thus out of the running.

So I'm looking for another method.

Some key details about the kinds of data we throw around:

This workload does not work with a "static workunit size" Hadoop setup. Similarly, we've evaluated S3-style object-stores, but found them lacking.

Our application is custom written in Ruby, and we do have a Cygwin environment on the Windows nodes. This may help us.

One option I'm considering is a simple HTTP service on a cluster of servers that have the GlusterFS volume mounted. Since all we're doing with Gluster is essentially GET/PUT operations, that seems easily transferable to an HTTP-based file-transfer method. Put them behind a loadbalancer pair and the Windows nodes can HTTP PUT to their little blue heart's content.

What I don't know is how GlusterFS coherency would be maintained. The HTTP-proxy layer introduces enough latency between when the processing node reports that it is done with the write and when it is actually visible on the GlusterFS volume, that I'm worried about later processing stages attempting to pick up the file won't find it. I'm pretty sure that using the direct-io-mode=enable mount-option will help, but I'm not sure if that is enough. What else should I be doing to improve coherency?

Or should I be pursuing another method entirely?

As Tom pointed out below, NFS is another option. So I ran a test. Since the above mentioned files have client-supplied names that we need to keep, and can come in any language, we do need to preserve the file-names. So I built a directory with these files:

When I mount it from a Server 2008 R2 system with the NFS Client installed, I get a directory listing like this:

Clearly, Unicode is not being preserved. So NFS isn't going to work for me.

I like GlusterFS. Actually, I adore GlusterFS. As long as you can give it some dedicated bandwidth everything's fine.

One of the best things about GlusterFS is using it with NFS. One of the surprising things I've been working with lately is NFS on Windows 7 and 2k8R2.

Clustering Samba sounds scary, and even if you do do that, Samba still lacks the ability to behave reliably in some windows networks (all that NT4 domain compatibility, never seem to be able to get past that).

I think that because each gluster node is in distributed,replicated mode then you should theoretically be able to connect to either and allow it to worry about moving your data around. As a result, the heartbeatd should be the thing that does the redirection and control which one you're talking to.

I suggest that you investigate using XFS as the underlying file system, as it's pretty good with big filesystems, and supported under GlusterFS

Maybe you can think in HA solution... use an LDAP for authentication (it can be replicated as many LDAP servers you want) and place an IP to listen to SMB services.

This IP will be floating on main server. When this is down Heartbeat can start services on second server.

This servers will have a mountpoint to glusterfs, and then all data will be there.

It's a possible solution and it's so easy to manage...

Not the answer you're looking for? Browse other questions tagged windows-7 high-availability glusterfs or ask your own question.