I have a OCZ Vertex 2 SSD that I've been using for a few years in a Win2k8 64-bit "Server" (Dell Precision M4300). Every few weeks it gets in a mood during which it temporarily freezes very often for about 60 seconds. During the freeze, any application or thread that is not dependent or blocked on disk activity is still functional.

The drive firmware is up-to-date.

Here is a screen cap of my resource monitor during a freeze. There is no legend for the Resource Monitor or description in the help, but I gather that green is good, the blue line is bad. 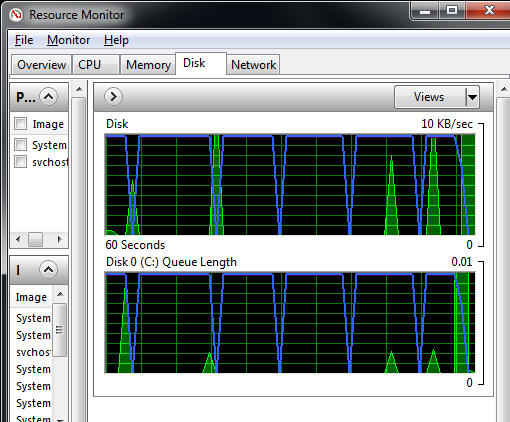 I've already opened a ticket with OCZ (finally, now that they have a proper support system) and they're recommending it to be replaced. But I'd like to know whether there's some setting that I've got wrong that could be fixed without replacing the drive, or which if unaddressed, will cause the same problem on a replacement.

The drive was kindly and without hassle replaced by OCZ for an Agility 3. I've restored the Windows 2008 system onto the new drive and to my surprise, the behavior persists! (Actually, it seems even more intense than with the first drive).

I'm having some luck uninstalling the ICH8M SATA Controller in the device manager - at least through one test, uninstalling it made the freezing cease, but it came back when I rebooted.

Disabling the AHCI mode in the BIOS seems to get rid of the problem altogether, but at what cost in performance or even data stability? TRIM?

We've got a bunch of these drives. This is one of 3 ways that the Vertex series goes bad:

Upgrade your firmware. Otherwise try to bring it back to your shop, the Vertex 2 hasn't got the best reputation concerning reliability. You didn't do anything wrong or used a bad configuration. It's just that the Vertex 2 has a high fail rate.

Does your server have SATA hotswap support enabled in the BIOS? With the vertex 3's at least, having SATA hotswap enabled on the port that the SSD is on would cause what you're seeing.

Not the answer you're looking for? Browse other questions tagged windows-server-2008 hardware hard-drive ssd or ask your own question.